Eritreans Catholics in the United Kingdom rose up to challenge the inhuman closure of 29 Health centres and 7 School in Eritrea By Petros Tesfagiorgis It took place on Saturdays 02 November 2019: Time 2:00 to 5.00 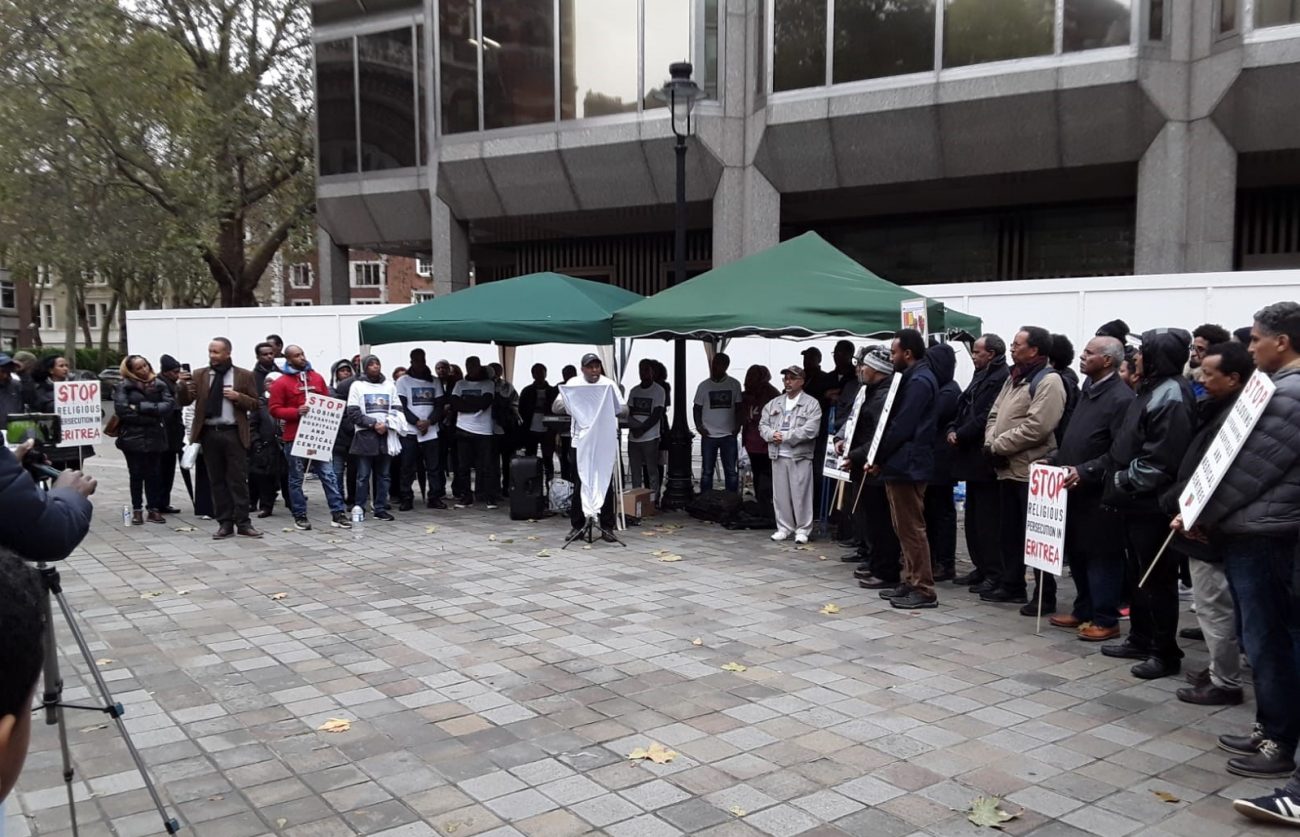 Well packaged Press releases titled “Religious persecution in Eritrea intensifies” was distributed to the demonstrators and to passer-by public outside the Cathedral. The area is a busy areas. It is near Buckingham Palace and Victoria railway station.

The programme was opened by Dr Fessehay Woldesus. I quote some of his speeches which was also in the press release, “The Eritrean people are under the yoke of human rights abuses and all their faith groups are victims of religious persecution. When the Catholic Bishops criticized the Government of Eritrea openly and called for a national reconciliation among its people, the Government   forcefully confiscated the 29 health centres run by the Catholic Church and 7 faith schools. The Health centres have been serving the people for over 60 years. The Eritrean Catholic Bishops have written a letter strongly opposing the actions of the government and asked the authorities to stop persecuting the church and to return its properties.”

Although the focus was on the closures, it was inclusive of other crimes in the land On the placards were photos of prisoners of conscience, the imprisoned Abuna Anthonious of Orthodox Church, Haji Mussa – Imprisoned for strongly opposing the decision of the Government to bring the Muslim Al-dia School to the fold of the regime, He died in prison as heroic martyr.

The Catholic Bishops stood up to their demand and asked the Government to return back the health centres so the people continue to get these vital health services.  It is at this moment in time that they should get solidarity not only from Diaspora Eritrean communities but from the international community as well.  That is why the organisers took to the streets and made a difference.

Sister Natalia of Comboni Franciscan read a message in solidarity with the brave Catholic Bishops. At the time of the illegal confiscation there were Combonian nurses volunteers from other countries. They are named Daughters of charity among them were Filipino missionaries who are forced to stop their work and are evicted from their places of worship and residence. This is a scandal. I was touched by the moving talk of retired old English man who knows the people and the country Eritrea. Indeed there are many international friends who cry for Eritrea.

Eritrea Focus – through the APPG (All Party Parliamentary Group) on Eritrea has tried to raise it in parliament but due to the election period that was not possible. However, Lord Alton of Liverpool has covered the vigil on his twitter to inform MPs and the public at large.

Various Eritrean religious denominations have also expressed their solidarity and explained more on the gross human rights violation taking place in Eritrea.  They were from Orthodox Church, Muslims and Protestants. After all the confiscation is having an adverse effect on the most disadvantaged sections of the Eritreans Society,  especially on the vulnerable children; pregnant women and the elderly who live in remote  and difficult to reach areas of the country. Further study has to be made to find out the health consequences of the people. This is a shameful act of historical proportion.

This demonstration has succeeded to move the Catholic Church establishment in UK it has established the take off for more advocacy campaign. My congratulations to the organisers. Indeed your call is a wakeup call.

When I wrote in Assenna.com of the need to hold concerted demonstrations when the Catholic Church run 22 health centres were closed emphasizing that the powerful YEAKL movement could seize the momentum and  make a big difference, there were comments which says that the closure of the 22 health centres and schools are like the rest of the repression. The international community will not do anything. As usual nothing will come out of the previous demonstrations. And this is not different. Of course I beg to differ with such remarks.

One of the commentator, Weldeyesus, said, I quote “pushing too much to divert the YEAKL movement into a lobbying fixture could be construed as misunderstanding the real objectives and goals of the movement.” I realized that the benefit of demonstrations are not yet fully understood by many Eritreans.  I thank Weldeyesus for expressing in eloquent English the mind set of many Eritrean justice seekers. They do share such sentiments.  On my part I will write about it bringing examples from the past.  During the struggle the EPLF mass associations have staged many successful demos. I will also mention some recent ones on my next article.

The benefit of many demonstrations are not monumental but significant in the struggle for Justice. In the vigil the number of demonstrations were not that much.  Although the weather was bad and there was persistent showers, the main reason can be people don’t see the merit of vigil. However, the way it is packaged, the quality and the prior lobby has compensated the number. It was a success.

NB 1. I being a student for few years in Asmara Comboni College let me mention some schools out of nostalgic feelings. In Asmara:  Comboni College, Asmara University, Collogio Lasale.  In Segeneti:  Scuola San Mikiele, In Keren Salvago Ragi.

The end:  Stand up rise up. Eritrea will prevail.