Eritrean youngster (MeronSemedar) took part in the 36thSan Francisco Marathon, in Oakland on the eve of Martyr’s day.

A young, visionary and energetic Eritrean youngster (MeronSemedar) took part in the 36thSan Francisco Marathon, that took place in Oakland on the eve of Martyr’s day. Meron was running with an Eritrean flag and a banner 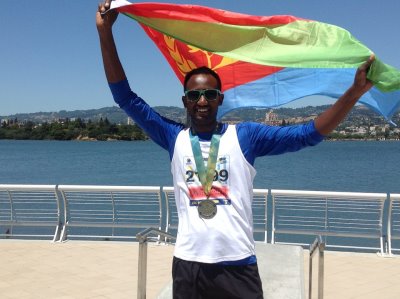 A young, visionary and energetic Eritrean youngster (MeronSemedar) took part in the 36thSan Francisco Marathon, that took place in Oakland on the eve of Martyr’s day.

Meron was running with an Eritrean flag and a banner on his hand and the banner reads: “Democracy, Freedom and Liberty in Eritrea”. When we asked Meron what motivated him to take part on such a noble cause, he said he was motivated by the continuously deteriorating conditions of human rights and oppression in Eritrea.”

Since the event took place one day before Martyr’s day, Meron articulated that: “Since the hopes of our martyrs are betrayed by the dictatorial regime in Eritrea, I also wanted to assure our Martyrs that one day their dreams will come true”

Being chosen as one of the best young People of Africa for Change, Meron also represented the Eritrean Democracy seekers in two big international events (One Young World and the Unuted Nations Annual Youth Assembly)

Meron alluded that his participation in the Marathon has symbolic significance in a way that the movement for change is slow among Eritreans and we must all run as fast as we can so that we can change the human right situation in the country once and for all. According to Meron: “you dont need to be an athlete to run for the cause of your people”.

“Officials reported 7,400 competitors on Sunday, up from around 7,000 last year. An additional 12,700 participated in the accompanying two half marathons, a 5-kilometer race and a children’s race – with overall numbers down slightly from last year.” and the 7,400 includes our hero Meron Semedar.

Meron was an active member of the Eritrean Movement for Democracy and Human Rights (EMDHR) in South Africa until he relocated to the United States of America recently.