After seven months of beatings, burns, electric shocks and constant threats to kill him, an Eritrean refugee has finally been freed by his kidnappers in Egypt's Sinai desert. Covered in deep scars and suffering from 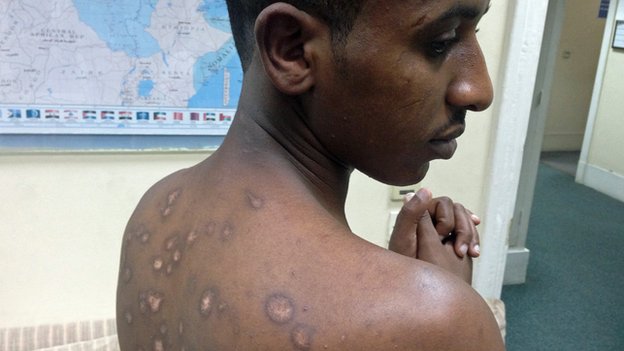 After seven months of beatings, burns, electric shocks and constant threats to kill him, an Eritrean refugee has finally been freed by his kidnappers in Egypt’s Sinai desert. Covered in deep scars and suffering from breathing problems and bone injuries, Philemon Semere, now in Cairo, told the BBC how it feels to be free at last.

“Words are not enough to say how good I’m doing right now. I’m so relieved after everything I went through. Death was very near to me and at one point all hope was gone.”

It was hard to believe that this was the same man whose terrible plight had been broadcast across Britain and much of the world a few months before.

In a rare and chilling phone interview last November, an evidently distraught and petrified Philemon Semere had told the BBC in broken English:

His Bedouin kidnappers forced him to make frequent calls to his family, warning them that he would be killed if they failed to pay a $33,000 (£22,000) ransom.

With the consent of Philemon’s family, I phoned the number he had called from.

Then, finally, the phone was answered.

An unidentified voice wanted to know who was calling and why. A long pause followed my answer.

Then Philemon came on the line. Sobbing, he said that his family could not pay the huge ransom and feared he would soon be killed.

“If he hasn’t any money, I will kill Philemon here.”

I asked the man, who later told me that he was the leader of the kidnap gang, if he had killed other hostages who failed to pay their ransoms. Appearing to relish the question he replied:

“A lot of people I have killed here.”

Facts on the ground seem to bear this out.

The UN estimates that on average 3,000 Eritreans fled into eastern Sudan each month last year. During that journey many of them were kidnapped, tortured and killed by Bedouin people-trafficking gangs. Their bodies were often dumped in the Sinai desert.

Philemon explained how he and a large group of fellow Eritreans had been seized by kidnappers soon after crossing into Sudan but had managed to escape into the desert.

Driven by raging thirst to drink their own urine after four sweltering days, they staggered to the nearest town for help.

But soon after they arrived there, locals tipped off their kidnappers.

Within hours they were thrown, hooded and chained, into the back of a truck and driven to North Sinai.

“When we got there we were surprised because the house they took us to in Sinai looked quite nice. But minutes after we arrived we were made to lie on the floor and told we’d die unless each of our families paid $33,000,” he said.

In the days and months that followed, Philemon and 19 other Eritrean hostages were repeatedly made to phone their families and plead with them to get the ransom money.

‘She heard my scream’

The kidnappers know that many Eritreans have relatives working in Western countries and can appeal to them for help.

Soon after the hostages were given a phone, the beatings, burning and electric shocks would start.

“They wanted our relatives to hear us screaming and crying in pain. That way they were more likely to pay the ransom money,” Philemon explains.

He described what happened the first time he called his mother:

“She heard my screams and couldn’t stop crying. I was crying too. We both just cried and cried until we had no tears left.”

He says that for the first few days after my phone call, he was treated better.

But the beatings and torture resumed not long after that. Only 11 of Philemon’s group of 20 hostages survived their seven months of captivity.

“There was death every day, right in front of my eyes. The kidnapper who spoke to you wasn’t lying. He’s killed many people, and he’s still killing many people.”

The kidnappers finally agreed to release Philemon after accepting that the $13,200 his now impoverished family had paid was all they had.

But then they changed their minds and demanded that he and two other men being held with him paid a further $10,000 between them.

Several weeks later the money was paid and the men finally freed.

Philemon has now made his way to Cairo, home to hundreds of former kidnap victims like him.

But his search for a better life has brought only horrors and left his family back home poorer than ever.

With no guarantee that he’ll be allowed to work to help pay them back, or be granted asylum, Philemon’s future, like that of so many others, hangs in the balance.

“God brought me out of the deepest darkness and only he knows what lies ahead for me now.”