Efrem Gidey wins senior schools title just months after arriving in Ireland from Calais An Eritrean student who came to Ireland from a refugee camp in Calais, France has been recognised for his sporting ability after winning the all-Ireland senior schools 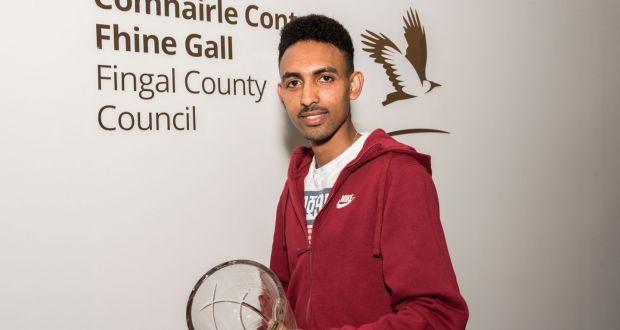 An Eritrean student who came to Ireland from a refugee camp in Calais, France has been recognised for his sporting ability after winning the all-Ireland senior schools cross-country title.

Efrem Gidey, a fifth-year student at Le Chéile Secondary School in Tyrellstown, Dublin, was praised for his “courage and dedication” at a special ceremony held on Tuesday in Swords by Fingal County Council.

Fingal councillors decided to hold the event after Efrem came first in the race in Waterford in March, just months after he arrived in Ireland after spending several years in a refugee camp.

Efrem was described at the event as “a great model of young people within community”, while councillors highlighted the important role of sport in promoting community integration.

Dr Áine Moran, the principal of Le Chéile, said the school was “proud of Efrem and his friends” who had enrolled in the school over the last year.

“We are tremendously proud of his sporting achievements but also his courage and tenacity. His friends also deserve to be part of this because they are his family now.”

The Government committed in November 2016 to admit 200 children from the camp in the northern French port city.