By Tesfa-Alem Tekle September 29, 2015 (ADDIS ABABA) –The Eritrea government has once again stepped up the push for lifting of United Nations sanctions imposed on to the nation since 2009. At the ongoing UN General Assembly 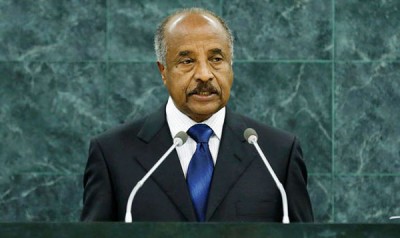 September 29, 2015 (ADDIS ABABA) –The Eritrea government has once again stepped up the push for lifting of United Nations sanctions imposed on to the nation since 2009.

At the ongoing UN General Assembly meeting in New York, the Eritrean minister of foreign affairs, Osman Saleh, said the sanctions were politically-motivated, unjust and would have negative implications on the socio-economic welfare of the population.

“The sanctions must be immediately and unconditionally lifted. Once again no nation or people should be left behind”, said Saleh.

The Eritrean foreign minister made the remarks while addressing the UN summit on the adoption of the post-2015 development agendas.

In 2009, the UN Security Council slapped sanctions on Eritrea for supporting al-Qaida allied Islamist militants in Somalia, which continues destabilising the East African region. Asmara, however, denies aiding al-Shabab or any other armed groups and demands for immediate lifting of the sanctions.

The Red Sea nation has repeatedly been appealing to the Security Council to lift the sanctions after a UN monitoring group, in its previous report, revealed that it found no evidence Eritrea was supporting al-Shabab.

The resolution imposed an arms embargo on Eritrea, a travel ban and an asset freezes on Eritrean political and military leaders.

The resolution came after the Intergovernmental Authority on Development (IGAD) member countries and the African Union requested the Security Council to take action.

Eritrea, however, continued pointing fingers on arch-rival Ethiopia and United States as the countries that allegedly engineered the “unjust sanctions” imposed six years ago.

Saleh has also met with the secretary general of the world body, Ban Ki-moon, during whic the two leaders held discussions on a range of areas, including international and regional peace and security matters as well as on other issues of mutual concern.

During their discussions, the Eritrean foreign minister stressed the need for Ethiopia to withdraw from the town of Badme, a flashpoint town claimed by Eritrea and Ethiopia.

“This would contribute to the enhancement of regional peace and security” he said.

Ethiopia and Eritrea fought a 1998-2000 war over border dispute which killed an estimated 70,000 people and ever since then, their disputes remain unsettled.

An independent UN border commission set up to demarcate the border and their delimitation and demarcation awarded Badme to Eritrea. Eritrea immediately accepted the ruling but Ethiopia demanded for more dialogue before implementing the ruling.

“It is therefore high time for the United Nations and all of us to shoulder our responsibility and urge those countries who don’t respect international law and their treaty obligations to do so”, said Saleh.

“No nation big or small should be allowed to occupy sovereign territory of another state”, he added.

Eritrea, a former province of Ethiopia, won independence from latter in 1991.