Eritrean forces board ship in Red Sea, not pirates: officials

(Reuters) - Eritrean forces have boarded a merchant vessel that was in their territorial waters in an incident the crew initially reported as a pirate attack, maritime officials said on Sunday. It was not immediately clear 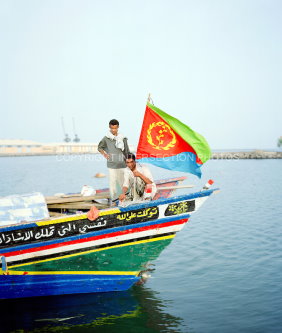 (Reuters) – Eritrean forces have boarded a merchant vessel that was in their territorial waters in an incident the crew initially reported as a pirate attack, maritime officials said on Sunday.

The container vessel had sent out a distress signal late on Saturday indicating that they were coming under attack by pirates.

Reuters data showed the vessel change direction sharply but also showed it moving towards the Eritrean coast early on Sunday, not the Gulf of Aden – the site of most pirate attacks and where one official had said the ship was headed.

“We assess this is an operation by the Eritrean forces, who went on board the vessel,” said Lieutenant Commander Jacqueline Sherriff, spokeswoman for the European Union Naval Force Somalia (EU NAVFOR) whose operational region is further south.

“We believe the vessel is now in the hands of the Eritrean forces,” she said, adding the incident had initially appeared on a system used for piracy alerts. “The crew has reported they thought they were being attacked.”

She said the latest information on the Eritrean role had been obtained from the UK Maritime Trade Operation (UKMTO), which had spoken to Marzooqah’s captain. UKMTO is based in Dubai and run by Britain’s Royal Navy.

Andrew Mwangura, secretary general of the Seafarers Union of Kenya, also said the 2,196 deadweight tonne vessel had been boarded by Eritrean forces, basing his information on regional coastguard reports. He had initially reported it was a pirate attack.

The number of attacks by Somali pirates dropped sharply in 2013. There were 176 confirmed piracy attacks in the region in 2011 and 36 in 2012, but this fell to just seven attacks in 2013 while no ships in that year were successfully seized.

EU NAVFOR, which has been deployed to patrol a region that includes the Gulf of Aden and Indian Ocean areas, has said the threat of piracy remains.

“Because the conditions in Somalia have not changed significantly or to any great extent … we have been saying there is no room for complacency,” Sherriff said.

Experts say the past two years or so of relative stability in Somalia after 20 years of chaos and war have offered a chance to tackle the problem of pirate gangs operating from Somali territory but say limited progress has been made.