Refugee inventor had a long journey from idea to market Jonathan Margolis   We learnt last week that Buckingham Palace needs rewiring, and its 6,500 plug sockets and 5,000 light fittings replacing, as part of a £369m refurbishment. Immense as 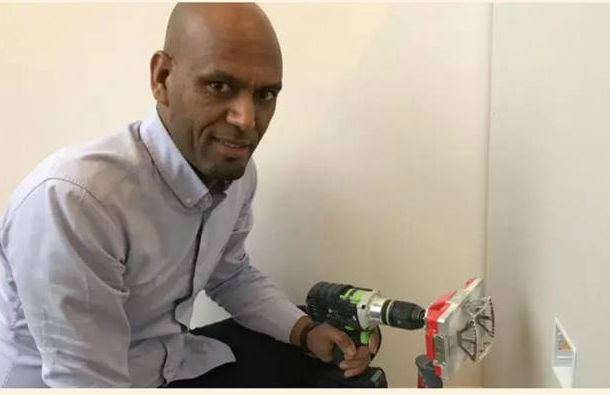 Refugee inventor had a long journey from idea to market

We learnt last week that Buckingham Palace needs rewiring, and its 6,500 plug sockets and 5,000 light fittings replacing, as part of a £369m refurbishment.

Immense as the job sounds, electricians would regard such a contract as big, but not shockingly so; plenty of hotel, apartment block and office projects need thousands of plugs, switches and so on.

But one of the most time-consuming jobs for electricians, my electrical contacts tell me, is cutting out the square holes in walls for sockets and switches.

To make such a hole in the plasterboard walls in modern buildings, you have to drill four corner holes, then saw the opening by hand. Square and oblong holes in traditional lath and plaster, or in brickwork, are even more time-consuming.

And they have to perform this two-to-five minute procedure a lot. If the UK’s 234,000 electricians cut three such square holes a day, we would be talking 250m holes a year.

Some time in the 1990s, a rather overqualified new fitter with an upmarket London kitchen company — he had a degree in mechanical engineering — was watching a colleague hacking out holes for some power outlets.

“Why,” asked the fitter, Michael Sebhatu, “don’t you use a square hole-cutter?”

“Because there’s no such thing,” the electrician replied.

Mr Sebhatu discovered that the electrician was right — apart from a tool called a Reuleaux triangle drill bit, which can shave a round hole into a square but is not practical for builders. There was nothing.

Now even if stories about power tools are not necessarily your thing, I would that readers stay with this one, because it has a peculiarly joyful twist — one that I suspect the world’s gathering rightwing nationalist movements would hate.

Mr Sebhatu quit his job, you see, to spend years self-supporting, working on a device to make square holes in seconds. His late thirties found him living alone, working as a handyman and ploughing £40,000 of his earnings into the project. He also did a masters degree in product design at London South Bank University.

The solution to the square hole problem finally came to him in a Costa Coffee shop on High Street Kensington. “Coffee shops were my office,” he says. True to the myths of great engineering breakthroughs, he used a napkin to sketch the idea for a drill attachment that converted rotary to lateral motion in four independent straight blades, set in a rectangle.

Soon he was producing detailed drawings with 3D software and commissioning prototypes. He called it the Quadsaw, but years went by without Mr Sebhatu achieving a viable product.

Then, through a handyman job, he met Ean Brown, who was the in-house lawyer for Stephen Rubin’s Pentland Group.

Mr Brown was starting a company, Genius IP, to commercialise breakthrough patents and Mr Sebhatu’s Quadsaw was to be his first product. The men went into partnership.

The £199 Quadsaw went on presale last week. Bearing three patents, it will be UK manufactured, although with German blades, and delivering from mid 2017.

It drills a square hole inside 10 seconds, and Messrs Sebhatu and Brown argue, could save electricians in the UK alone 16m hours of labour annually — £320m in savings a year based on £20 per-hour electricians’ pay rates.

The launch model cuts plasterboard, but Mr Sebhatu is working on blades for wood, ceramics, glass and masonry.

Quadsaw’s announcement is already causing a stir in the building trade — they say orders are pouring in from Europe, the US and Asia.

So the indications are that it could be a big British success story for a modestly revolutionary manufactured product.

Here is where the story goes from one of classic, old-school British innovative talent to something of significance in today’s political atmosphere of hostility to immigration.

For Mr Sebhatu came to Britain as a refugee from Eritrea in 1990. He was born in a village 45km south of the capital Asmara, with no running water or electricity.

At 11, working in the fields with his father, he was seized with the idea of becoming an engineer. “I saw an aeroplane and asked my father how it flies. He said if I wanted to know that, I would need an education,” he says.

So he walked to Asmara, attacked by snakes and dogs along the way, to live with an uncle and go to school.

He later moved to Ethiopia to continue his education, but fled to Kenya when he was told to join the Ethiopian army’s battle with the Eritrean insurgent movement — in which his elder brother was a fighter.

Determined to pursue his dream, he escaped persecution in Kenya, with a forged passport and a ticket to Stockholm. But Sweden would not accept him, and he ended up in Norway, six hours north of Oslo.

He discovered it would take 10 years to qualify in Norway, and made his way to England, where he was given leave to remain as an asylum seeker. Speaking only the ancient Tigrinya language of Eritrea, a little Norwegian and a few words of English, he was nonetheless in education within two weeks. He worked his way through to degree level as a shelf-stacker in a Kwiksave supermarket and later as a minicab driver.

“It has been a sacrifice not having a family, but I had to focus on my idea,” he explains. “But I’m only 49 now, and if this works, I hope I can start a more normal life.”

Showing the Quadsaw website to people in the building trade, the reaction is indeed enthusiastic. One, however, Pav Kharaud, managing director of London housebuilder Harper Homes, had a concern.

“It’s a great product,” said Mr Kharaud, “but it makes the job so easy — even though it has a spirit level on it, I could see guys losing concentration and punching through holes that are wonky.”

I suspect, though, that Mr Sebhatu’s life may become more successful than the normality he longs for.

The modern world does not tend to be friendly to refugees.

But if Quadsaw sells around the world, a small fortune, an honour and a Queen’s Award for Export one day cannot, perhaps, be inconceivable for this one at least.