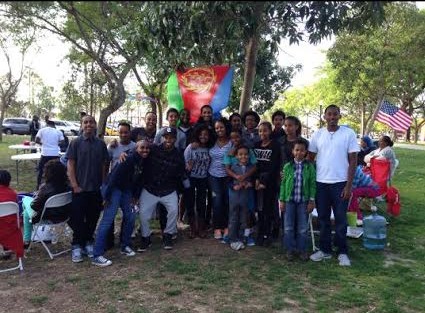 The Eritrean community in San Diego, California, in North America dates back to the 80’s. It was a very strong community that many of the people in the photograph below were involved in or was raised in the community as a child. The Eritrean community in San Diego was very strong and once played a major role in many of our lives, especially the youth who attended Tigrinya school and many other educational and social activities. However, as the years passed the Eritrean community in San Diego lost its tenacity in terms of “We the People.” Historically there has been many issues especially politically, which at the time many of us were too young to understand; and honestly a bit too much to write for now, under this thread, however we will disclose all issues in the matter soon. Ultimately, we are happy to say that in San Diego, those of us individuals who believe in “We the People” and the democratic values in having a non-religious and non-political community have spoken; and officially we now have the Eritrean American Community of San Diego, which honored and commemorated our Eritrean Independence this past Sunday, May 24, 2015; and also held a candlelight vigil for our brothers and sisters who were beheaded in Libya by ISIS and drowned the Mediterranean Sea. San Diego, California along with many other cites and states in North America agreed to an initiative for our Eritrean Independence, in unison to sacrifice, “GUILA” for one night due to our 800 brothers and sisters drowning in the Mediterranean Sea and the horrific beheading of our brothers in Libya; giving us Eritreans a reason to say STOP; and to seriously reassess what is going on to us as Eritreans and our future as Eritreans. All this taking place a month prior to our Eritrean Independence. Are be-headings, drowning in the Seas, living in Refugee Camps, and being migrants of the world and wandering like no-mads without a home define us as Eritreans? Is this the Eritrea our martyrs fought for? Taking all of the above tragedies in consideration we in San Diego decided to honor our Eritrean Independence day with discussion, poetry and prayer honoring our Eritrean history, and giving homage to our martyrs who sacrificed there lives for us to have an independent Eritrea; and also remembering our Eritrean brothers and sisters who are suffering, struggling and dying all over the world. We had four generations at our gathering for our Eritrean Independence; passing down the tradition of honoring our Eritrean Independence; and in doing so we have an obligation to be an example to them and ultimately we owe it to ourselves as Eritreans with a conscious to do the right thing for our martyrs who sacrificed there lives for us to have an Independent Eritrea and ultimately to our people and our nation. The little ones were so excited to eat cake and sing Happy Birthday to Eritrea, which was bittersweet because the teenagers were asking  questions about, “how come there is another group of Eritreans who live in San Diego having a party for Eritrean Independence; and that it does not make sense.” As there big brothers and sister we tried to explain the situation and ultimately said that we all love “GUILA” it is a beautiful part of our culture, it is just that under the current circumstances of our brothers and sisters drowning in the Mediterranean Sea and our brothers being beheaded, a month before our Eritrean Independence, that it was not appropriate to have a party; and that those who are deciding to celebrate and party with a “GUILA” will eventually come to there senses; and that one day we will have reconciliation and be one community again like we once were because we are a;; brothers and sisters. We are proud and honored to commemorate our Eritrean Independence in 2015; yet in doing so we must always keep in mind the state of our Eritrean brothers and sisters and the state of our beloved nation Eritrea.