Eritrea vs Ethiopia: The missing link is all about leadership and citizenship 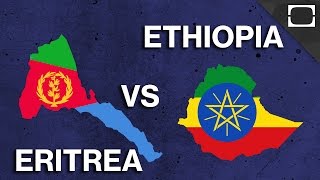 To the outside world or to the media world, Eritreans leave their country via trafficking business whereas Ethiopians leave their country using passports and visas. Their final destination as far as immigration is concerned is the same? Both nationals seek mainly political asylum. There is nothing wrong with these people except they lack democratic Leadership in Eritrea and the concept of citizenship in Ethiopia. Both nationals lack the tool of leadership and the process of citizenship.

For me, leadership is a process whereas citizenship is a product.  Without a democratic process in the Eritrean leadership and without a product of citizenship in Ethiopia, to the outside world, there seems too much confusion and disruption. For this reason, I am out of this process and product but I can comment on the missing link.

Months ago, just before the Presidential election of the United States, I wrote an article on three individuals that could be presidents for America, Eritrea and Ethiopia. At the time, I was intentionally avoiding the roles of AA (Astronomy & Astrology). But reality has kicked in and the three individuals have become and are on the way of becoming leaders of Eritrea and Ethiopia.

To put it bluntly, Mr. Donald Trump, Dr.Bereket H. Selassie and Ato Hama Tuma aka Iyassu Alemayehu were not endowed by Mother Nature to be leaders. This is in line with the Ethiopian philosophy of being governed by “Arbatu Enssat”. In Ethiopian history and belief in theology and philosophy, only those who can control their individuality, their family, their honesty and hard work can be leaders in their Community. Without these values of individuality, family, honesty and hard work, no one should be or would be a member of any leadership. That is the cardinal rule by which Eritreans and Ethiopians should be ruled.

B’Rhan, Bereket, Beyene (BBB) explains the triangular principle upon which all Eritreans want to survive and thrive.

In the Ethiopian case, a fourth dimension has been added to the triple B and that is “Bellette” signifying competition in all aspects of life style. This competition concept does not sink with Eritreans at all. Whereas in Ethiopian history of politics, it is a well-established phenomenon.

To those Eritreans who adamantly refuse to accept the leadership of Isaias Afeworki, they better understand the rule of “Arbatu Ens’sat”. He is one of the social animals that are endowed with leadership concept, theory and application. Maybe he is an honest and true Ethiopian. Time will tell.

Dr. Bereket H. Sellassie as in the case of Donald Trump was not born leader. He belongs to the category of knowledge. As an Ethiopian, he excelled in being an attorney general as well as a constitutional professor. Many Eritreans and Ethiopians were not appreciative of his accomplishment. It is a misconception that he would be an ambitious leader. No way, his passion is not to lead. It is worthwhile to remember what Donald Trump (now President Trump) has said during the campaign, “I am not a politician, I am a businessman”. Nevertheless, the American people elected him. Americans needed self-reliance and small government.

In that case, Dr Bereket H. Selassie and President Isaias Afeworki should switch their roles. President Isaias could be a leader in the implementation of the Constitution whereas Philosopher (PhD), Bereket Habte Selassie could take over the Presidential/Prime ministerial position for Eritrea. “It is just a thought not a sermon”, as the preacher Solomon preaches.

What about Ethiopian leaders? The deceased Melese was a born leader. He was one of the Arbatu Ens’sat of Ethiopia. Currently, there is no one born leader in Ethiopia who is running the country. Ethiopia is run by a bunch of leaders ranging from moralist, capitalist, and socialist and so on and so forth. There is no politics or business in the country. There can only be feud and revenge in the set up system of governance.

So what is the alternative? The other plausible alternative is to make Hama Tuma alias Iyasu Alemayehu of EPRP. Is he a born leader? No, he is not. But if Donald Trump can be a leader for America, Dr. Bereket and Hama Tuma can also qualify to be presidents for they were born in the same month. Again, this is a thought, not a sermon.

Hama Tuma nowadays is announcing that he is the only remaining founder of EPRP. That is the missing link. EPRP was/is founded by Revolutionaries who opposed the land holding system, the oppressive rule of the Aristocracy and the imposing will of Imperialism both of the West and the East. In other words, the peasants, the workers and the intelligentsia have all in unison struggled and fought to bring fundamental change for all people of class. EPRP was neither in search of identity nor of destination.  EPRP’s – either origin or destination- was/is not abstract. It is concrete and feasible. The question for EPRP is the road that it should travel to reach its goal. EPRP deliberately chose DEMOCRACIA – a term of concept and action. What this means is that each individual of EPRP member or associate member should be a democrat in action as well as in thought. It is the path to the ultimate goal. In other words, it is a process, physically as well as mentally. From Assimba Red Mountain to the open Market of MERCATO traversing Tselemt escarpment and valleys. In the modern alphabet soup, it is called ATM.

The remaining task for EPRP is to identify those born leaders and bring them to congress of the party. The system of check and balance will be implemented. So far, the current leaders of the party have commitments for freedom and liberty and not Independence for independence for EPRP members and associates has neither concept nor analogy. It is a given phenomenon. Leadership and citizenship goes hand in hand.