"Asmara defends conscription saying it faces a constant threat from Ethiopia, but has said it has ended policy; rights group says 'just rhetoric'. " ERITREA’S claims that it has ended indefinite national service are untrue and 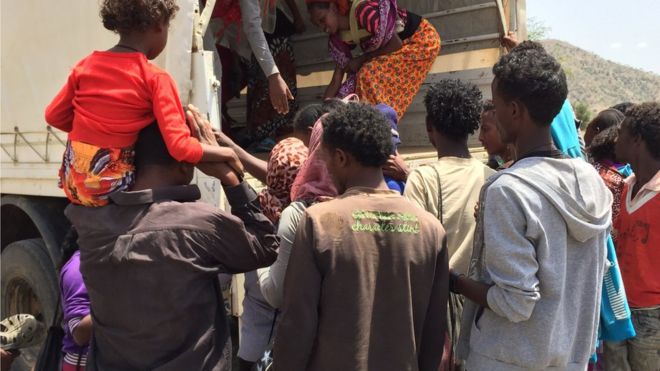 “Asmara defends conscription saying it faces a constant threat from Ethiopia, but has said it has ended policy; rights group says ‘just rhetoric’. “

ERITREA’S claims that it has ended indefinite national service are untrue and refugees arriving in Europe should not be deemed economic migrants, Amnesty International said Tuesday, warning of “persistent atrocities”.

Refugees from the repressive Red Sea state make up the third-largest number of people risking the dangerous journey to Europe after Syrians and Afghans, running the gauntlet of ruthless people smugglers and treacherous waters.

There was no immediate response from Asmara, but Eritrea has defended its policy of decades-long national service from which some 5,000 people flee each month, saying it has “no other choice” due to threats from long-standing enemy Ethiopia.

“Conscription continues to be indefinite for a high proportion of conscripts and sometimes lasts for decades,” Amnesty said in a report.

Amnesty dismissed Asmara’s claims it had limited national service to 18 months, a move used by some in Europe to argue that conditions for Eritreans at home have changed and they could be sent back.

“The situation facing conscripts in Eritrea is desperate, and exposes the lie behind claims made by certain host countries that most Eritreans arriving at their borders are economic migrants,” said Amnesty’s Michelle Kagari.

“These people, many of them children, are refugees fleeing a system that amounts to forced labour on a national scale.”

The report, titled “Just Deserters: Why indefinite national service in Eritrea has created a generation of refugees,” describes the horrific conditions that drive Eritreans to leave despite the fact the Horn of Africa nation is not at war.

During service, families are split, conscripts are “abysmally paid” and leave is often withheld for years, it added.

Rule breakers can be incarcerated in “underground cells or in shipping containers.”

Those who escape describe crawling under razor wire, tiptoeing across minefields or sneaking past armed border guards in their bid for freedom.

In the past, entire Eritrean football teams have absconded while playing in tournaments abroad and fighter jet pilots have escaped in their aircraft.

“Eritrea is haemorrhaging its youth. Children are walking alone, often without telling their parents, to other countries, to avoid lives of perpetual forced labour on low pay with no education or work opportunities,” Kagari said.

“That they choose to undertake such precarious and unsafe journeys to supposed safe havens reflects the gravity of the human rights violations they would face if they stayed at home.”

Under Eritrean law, conscription is limited to 18 months, but Asmara says it has to rely on its people to defend it from Ethiopia, from whom it broke away from in 1991 after a brutal 30-year independence struggle, before returning to war in 1998-2000.

Troops still eyeball each other along the frontier, with Ethiopian soldiers defying an international ruling to leave Eritrean land.

Eritrea was “left with no other choice but to rely on its population to defend its independence and sovereignty,” Asmara said in June.

The Amnesty report, based on interviews with 72 Eritreans who fled the country since mid-2014, said Asmara’s change of policy was just rhetoric.

“There have been no discernible changes… conscription into National Service continues to be extended indefinitely and conscripts continue to be deployed in a range of civilian as well as military roles,” the report read. “The system therefore continues to amount to forced labour, in violation of international law.”

Sending Eritreans back would see them locked up in dire conditions at home, Amnesty added.

“Those who try to escape are arbitrarily detained,” the report read.

“The same fate would likely befall those forcibly returned from overseas upon the rejection of their asylum applications.”