Eritrean authorities have stage-managed the first public appearance in 10 years of Patriarch Abune Antonios, rights group Christian Solidarity Worldwide has told RFI. The former head of the country’s Orthodox Church had been under house 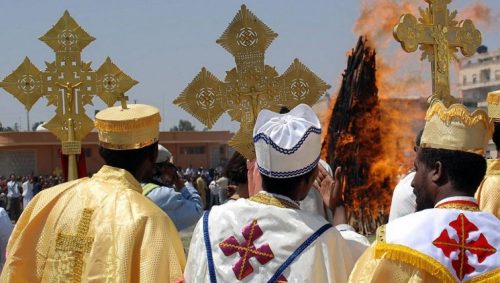 Eritrean authorities have stage-managed the first public appearance in 10 years of Patriarch Abune Antonios, rights group Christian Solidarity Worldwide has told RFI. The former head of the country’s Orthodox Church had been under house arrest for opposing the government’s attempts to control one of the country’s largest Christian denominations.

“Everything points to trying to manage a narrative because of international pressure,” said Christian Solidarity Worldwide’s Khataza Gondwe, referring to Antonios’s appearance during mass at a cathedral in Asmara on Sunday.

Despite being present at the service, Antonios was not allowed to say anything, people were forbidden from taking photographs and afterwards he was returned to where he is being detained, said Gondwe. “There were suspicions that this might not be all that it cracked up to be,” she added.

The European Parliament recently adopted a resolution calling for the patriarch’s release, while the French government in June said that his continued house arrest showed the Eritrean government’s “serious and persistent violation of the freedom of religion or belief and fundamental freedoms”.

“There’s been mounting international pressure about his case, he recently turned 90 years old, there was no justification for holding a 90-year-old under house arrest for all these years,” said Gondwe, who heads up the London-based religious rights group’s Africa team. “I think it was becoming an embarrassment.”

The former leader of Eritrea’s Orthodox Church had protested against the government’s meddling in church business and was last seen publicly at the end of 2006.

“He had increasingly been objecting to government interference in church affairs. The government wanted to tighten its control of the main Christian religious group,” said Gondwe.

“He was progressively deprived of his powers, including administrative oversight of the patriarchate, then he was confined in his residence and later in 2007 he was taken to an unknown destination and held under house arrest that became increasing stringent,” she added.

The European Parliament’s resolution outlined the patriarch’s refusal “to excommunicate 3,000 parishioners who opposed the government” as one of the reasons for his detention. Since then “he has been held in an unknown location where he has been denied medical care”, the adopted text said.

A statement by Eritrea’s Orthodox Church said that the “issue” with Antonios had “come to an end” on 11 July following a meeting of the Synod, according to a translation of the Tigrigna statement by the church’s diocese in the US and Canada. It said the meeting of the church’s council had “come to conclusion with full reconciliation, peace and love”.

Eritrea’s Orthodox Church plays an important role in a society that is reported to be approximately half Muslim and half Christian. It is the largest Christian denomination in Eritrea in terms of membership, according to Christian Solidarity Worldwide.

Eritrea’s Minister of Information Yemane Gebremeskel told RFI that “the country is a secular state and does not intervene in purely religious affairs”.