The Egyptian army has launched a major offensive against militants in Sinai. Eyewitnesses told the BBC that tanks, armoured vehicles and troops - backed by Apache helicopters - had attacked the militants in towns along the 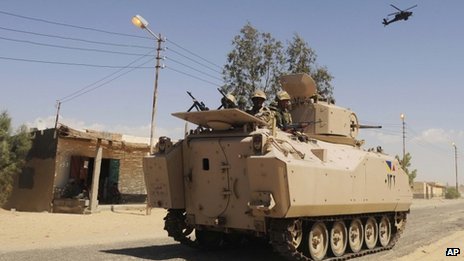 The Egyptian army has launched a major offensive against militants in Sinai.

Eyewitnesses told the BBC that tanks, armoured vehicles and troops – backed by Apache helicopters – had attacked the militants in towns along the border with the Gaza Strip.

The operation is said to be the biggest of its kind in recent years in Sinai.

Meanwhile, Egyptian soldiers have discovered mortars and other explosives on a railway line near the Suez Canal, the state news agency reports.

There have been frequent attacks on pipelines and security forces since the uprising that toppled former President Hosni Mubarak in 2011.

On Thursday a powerful explosion targeted Interior Minister Mohamed Ibrahim as he left his Cairo house for work. He survived unscathed, but officials say another person died.

A military official, who spoke anonymously, told the Associated Press that the army would “clean” the areas in Sinai where Islamic militants operated.

This included the towns of Rafah and Sheikh Zuweyid, as well as nearby villages, he said.

A witness told the news agency he had seen a column of tanks, trucks carrying infantry, rocket launchers and other military vehicles. Smoke was also seen rising from the area.

A security official said “dozens” of insurgent suspects had been killed and wounded.

“This is by far the largest operation we have seen and the one we have been waiting for,” Sheikh Hassan Khalaf, a tribal leader from the targeted area, told the Associated Press.