Trump rides wave of anti-establishment sentiment to one of the most improbable political victories in modern US history. Donald Trump shattered expectations on Tuesday with an election night victory that revealed deep anti-establishment anger among American 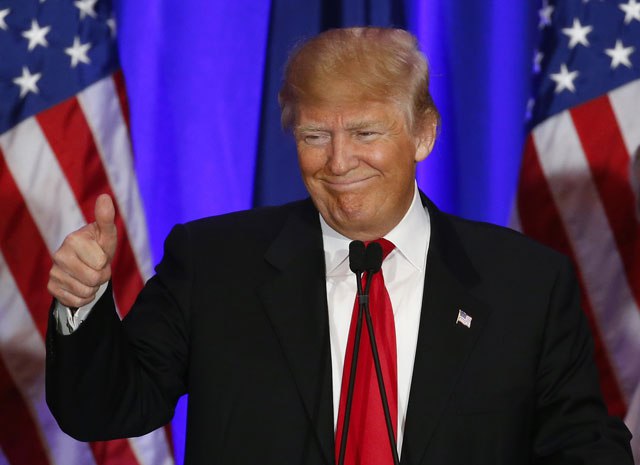 Trump rides wave of anti-establishment sentiment to one of the most improbable political victories in modern US history.

Donald Trump shattered expectations on Tuesday with an election night victory that revealed deep anti-establishment anger among American voters and set the world on a journey into the political unknown.

The Republican nominee has achieved one of the most improbable political victories in modern US history, despite a series of controversies that would easily have destroyed other candidacies, extreme policies that have drawn criticism from both sides of the aisle, a record of racist and sexist behaviour, and a lack of conventional political experience.

After surprise early victories in Florida, North Carolina and Ohio, it fell to the Rust Belt states of the industrial midwest to determine the result of his stunning upset.

Wisconsin and Michigan, two states hit hard by a decline in manufacturing jobs and lost by Hillary Clinton to Bernie Sanders in the Democratic primary, were led by Trump as the race headed for an early morning cliffhanger.

At 2.30am, the Associated Press projected Trump had won Wisconsin and called the overall race for Trump, who passed the 270 electoral college votes he needed to secure the presidency.

Shortly afterwards, Clinton called Trump to concede but did not make a public address.

Trump left Trump Tower for the short journey to the Hilton Midtown, where the president-elect then took to the stage and insisted he would “deal fairly with everyone”.

“I have just received a call from Secretary Clinton. She congratulated us – it’s about us and our victory – and I congratulated her on a very hard fought campaign.

“Now it is time for Americans to bind the wounds of division,” he added. “It is time for us to become together as one united people … I pledge to every citizen of our land that I will be president for all Americans.”

Earlier, Democratic campaign chairman John Podesta appeared before distraught supporters to announce that she would not be appearing to give a concession speech. “Everybody should head home,” he told them. “Get some sleep. We’ll have more to say tomorrow.

“It’s been a long night and a long campaign,” he added. “We can wait a little longer, can’t we? They are still counting votes and every vote counts, several states are too close to call so we are not going to have anything more to say tonight.”

Republicans have also secured majorities in the House of Representatives, the Senate and will probably get to reappoint a fifth Republican nominee to the supreme court – potentially leaving the new president with few checks and balances.

Investors reeled from the prospect of a victory that would reverberate around the world and futures markets pointed to a fall of nearly 600 points in the Dow Jones Industrial Average.

As results started to come in, two candidates with very different views of America were watching television just two minutes’ walk from each other: the Clintons at the Peninsula Hotel in midtown Manhattan and the Republican team in Trump Tower.

But the mood in the Trump camp shifted early after signs of a strong performance in Florida and Clinton supporters began contemplating the consequences of a result few thought was possible.

At a “victory party” for Clinton supporters, under the veil of a glass ceiling that was meant to be an epic symbol of a historic night when gender barriers were swept aside, there was bleak mood.

Thousands of people who filled the Jacob Javits convention center in midtown Manhattan – and the thousands more lining the blocks outside – had eyes glued to the TV. A woman clasped her hands over her mouth in disbelief as the newscasters announced Trump had won North Carolina.

The mood dropped markedly as results began to roll in: Ohio, Florida, North Carolina, all for Trump. Outside the Javits Center at the so-called “block party”, a couple embraced. The woman wiped a tear from her face and the man stroked her hair.
Another man, who identified himself only by his first name, Theo, called the results “scary and troubling”. “You don’t think there could be so much hate in this country – there is.”

After Podesta spoke, a stream of stunned supporters, some in block-colored pantsuits, others toting tired children, many wiping tears from their eyes, exited the building that was meant to be a symbol of barriers broken.

“What happened? What did we just do?” asked Gloria Lowell, the mother of an adopted son from Guatemala.

Staffers hugged each other and wiped tears from their eyes. They had prepared for this outcome – but no one truly believed it.

Susie Shannon traveled from California to be at the Javits Center on Tuesday night so that her eight-year-old daughter, Gracie, could say she was there when Hillary Clinton was elected president.

They left the center in the early hours of Wednesday morning stunned.

“We waited for hours to come here tonight,” she said in shock, holding her daughters hands. “I wish Clinton herself had come out and spoken to us. It would have been nice to hear from her.”

Meanwhile, the crowd at Trump’s watch party in the midtown Hilton grew increasingly excited as the evening went on. Loud cheers erupted every time that returns from Florida and Ohio were shown on the television screen. The mood grew increasingly optimistic as attendees huddled anxiously around their televisions clasping their drinks and their cellphones in equally tight grips.

Many shouted “lock her up” when Clinton’s name was mentioned and berated members of the media for being slow to report election results.

Exit polling by CNN suggested 88% of voters had made up their minds more than than week ago, before last minute FBI inquiries into Clinton’s emails temporarily raised fears of a late Trump surge.