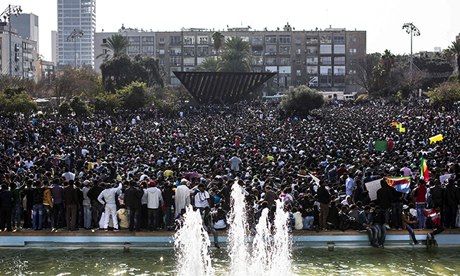 Thousands of African migrants, many holding banners demanding freedom for compatriots jailed by Israel, have staged a protest in Tel Aviv against Israel’s new open-ended detention law that allows migrants to be sent to a desert prison.

The protests prompted a rare and strongly worded statement from the UN refugee agency, saying Israel’s incarceration of migrants, including family breadwinners, caused “hardship and suffering” and was not in line with a 1951 world treaty on the treatment of refugees.

Human rights groups say more than 300 people have been arrested since the law, which allows authorities to detain migrants without valid visas indefinitely, was passed by Israel’s parliament three weeks ago.

Dozens more have been summoned for detention, among them men with wives and children, according to rights activists and the United Nationshigh commissioner for refugees (UNHCR).

About 60,000 migrants, largely from Eritrea and Sudan, have crossed into Israel across a once-porous border with Egypt since 2006, Israeli authorities said.

Many live in poor areas of Tel Aviv and say they want asylum and safe haven. Binyamin Netanyahu, the prime minister, has said he views the presence of many of the Africans as a threat to Israel’s Jewish social fabric.

An Israeli border fence has cut off the African influx from Egypt since 2012, but migrants who have already crossed can be sent to what the government describes as an open prison in Israel’s southern desert.

The new facility, which was the focal point of the protests by 10,000 in Tel Aviv, is similar to a halfway house. Detainees can leave during the day but must report back by nightfall.

Migrants can be held there without a time limit pending voluntary repatriation, implementation of deportation orders or resolution of their asylum requests.

In a written statement, Walpurga Englbrecht, the UNHCR representative in Israel, said she was “particularly disquieted” about the newest Israeli facility that “would appear to operate as a detention centre from where there is no release. This means in effect indefinite detention”.

She urged Israel to look for new solutions, saying that warehousing refugees was not “in line with the 1951 refugee convention”.

Englbrecht also criticised Israel’s labelling of many migrants as “infiltrators,” saying most were refugees or deserved international protection.

“Placing asylum seekers in duress that may force them to opt to return without having examined their asylum claims could amount to a violation” of the refugee convention, she said.

Hotline for Migrant Workers, an organisation supporting the Africans, accuses Israel of pressuring hundreds in its jails to accept payouts and leave. More than a dozen agreed to leave for Eritrea earlier this year in order to win release from jail.