Dear Europe, if you really must re-engage with Eritrea, here’s how you should do it

Posted on August 23, 2016 by Rufael Tecle Unless Europe demands conditions as it re-engages with Eritrea, it will simply be strengthening the very regime responsible for thousands fleeing in the first place. After years of treating 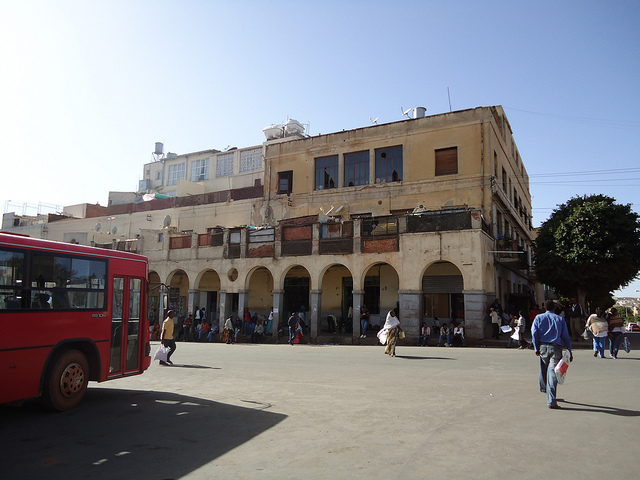 Unless Europe demands conditions as it re-engages with Eritrea, it will simply be strengthening the very regime responsible for thousands fleeing in the first place.
After years of treating it as a pariah state, Europe is reaching out to Eritrea. Credit: The Come Up Show.

For many years now, relations between Eritrea and the West have been frosty at best. The Horn of African nation is often labelled “Africa’s North Korea” or described as a “prison state” by the press in the West, where it is viewed as a pariah. Meanwhile, the Eritrean government has rarely pulled its punches in hitting back at Western governments that it accuses of conspiring against it.

At least until recently. Over the past months, this long-standing standoff has notably softened, with both sides shifting in their approach and rhetoric.

On the one hand, the government in Asmara appears to have embarked on a concerted public relations offensive to improve its international image. After refusing entry to international journalists for several years, it has invited a number of reporters, leading to certain more sympathetic pieces in the mainstream press such as the BBC’s ‘Has Eritera’s Migration Problem Been Exaggerated?’ and the New York Times op-ed, ‘It’s Bad in Eritrea, But Not That Bad’.

On the other hand, European countries seem to have relaxed their long-standing rebuke of Eritrea. The European Union is reportedly considering Eritrea as a partner in its bid to slow down the movement of people towards its shores and recently announced a multi-million dollar development package for the country.

Why is Europe re-engaging with Eritrea?

There seem to be two overarching motivations behind Europe’s change of heart.

The first of these is the so-called refugee and migrant crisis. Just 25 years after Eritrean men and women put their lives on the line to secure the country’s independence in 1991, thousands are now fleeing it. According to the UN, an estimated 5,000 people leave the country every month. This means that despite having a population of just 6.5 million and officially being in a time of peace, Eritrea ranks alongside the likes of Iraq in terms of refugee-producing countries.

The reasons for this movement are well-documented, including in a recent report by a UN Commission of Inquiry, which accuses the government of crimes against humanity. The document outlines widespread incidents of torture, rape, and murder, and condemns the country’s indefinite military service.

These findings could provide a reason for Europe to double down on its criticisms of Eritrea. But with anti-immigrant sentiment rising across much of continent amidst the influx of refugees and migrants, it seems that European governments have instead become far more willing to engage with Asmara in the hope that this could help stem the flow of people.

Overlooking human rights abuses, the European Union is considering including Eritrea as a partner in its goal of “managing migration”, and in December 2015, promised the country €200 million ($225 million) over 4 years “to promote poverty reduction and socio-economic development”. The hope is that improved socio-economic conditions and efforts by Asmara could help slow down the number of Eritreans journeying north.

The second possible reason behind Europe’s change in approach could be more geostrategic. While Eritrea has been left out in the cold by the West, it has more recently been forging closer links by looking eastwards.

China, for instance, is reportedly building a science college and investing in Eritrea’smining sector, while Asmara sent a high-level delegation to the 2015 Forum on China-Africa Cooperation. Meanwhile, Eritrea’s security ties with the Gulf States appear to begrowing too. Saudi Arabia and the UAE are understood to have provided Asmara with cash and much-needed fuel supplies in exchange for hosting a military base for their campaign in Yemen. And Qatar, which has 200 troops in the country, has reportedly been deepening its links with government recently too.

Noticing Eritrea’s growing usefulness to the likes of China and the Gulf states, Europe may have been prompted to end its censure of the country in order to avoid losing its influence in the region.

How should Europe engage?

At the same time Europe has been softening its stance, Eritrea also seems to have been making greater efforts to improve its international image. Media efforts such as “The Other Narrative”, a flattering 25-minute documentary reportedly made by “an independent think thank [sic] organisation based in Asmara” have emerged recently. And a number of journalists have been allowed into the country, leading to articles in the likes of the BBC and New York Times that have challenged the country’s dire reputation.

There are lots of legitimate critiques that can be – and have been – aimed at the content and framing of these more positive articles. And there are many ethical questions that can be asked about Europe’s decision to build closer ties with a repressive regime in Asmara.

However, if we are to assume that a rapprochement is already in the works, it is perhaps most pressing and important here to address the practical issues that will emerge from such a re-engagement. If this is going to happen, how could it happen so that it works in the interests of both sides?

On this front, the first thing European policymakers hoping to stem migration must do is to avoid the mistake of equating an Eritrea government emboldened by a fresh aid package with a country that is more stable.

After all, in the likes of Egypt and Tunisia, the West’s largely unconditional aid served to prop up seemingly stable authoritarian governments, right up to the point that unaddressed systemic injustices and grievances exploded into revolutions. Meanwhile, it should be noted that many of the African refugees and migrants trying to reach Europe are fleeing repressive conditions in Western-backed regimes.

Unless Europe demands certain conditions from Asmara as it re-engages with aid packages and international legitimacy, it will simply be strengthening and prolonging the very regime responsible for thousands of Eritreans trying to flee each month in the first place. As well as ensuring development aid goes to socio-economic projects, European government must also therefore insist on certain reforms to address the systemic human rights abuses forcing so many to flee.

To begin with, Eritrea’s highly-criticised indefinite national service, which is often a driving factor behind people fleeing the country, must be limited to 18 months and civil service salaries must be raised.

Asmara must also release political prisoners. In March, four Djiboutian prisoners of war were set free after mediation efforts by Qatar, but there are many more political detainees still being held. These include members of the so-called G-15, a group of individuals that were jailed after writing an open letter in 2001 criticising President Isaias Afwerki; members of US embassy staff who have been detained for over a decade; and others who have expressed dissent.

Finally, the Eritrean government must show that it recognises human rights abuses have been committed – including by elements of its own leadership – and bring those responsible to justice. This set of actions would at least indicate a degree of good faith.

Furthermore, European governments must ensure that Asmara follows through on its promises, recognising that Afwerki’s government has a pattern of paying lip service to calls for reform before failing to implement them. The promises to reform national service that were made in the midst of the EU’s €200 million package negotiations, for example, have yet to develop past the stage of private assurances. In February, there was a positive sign as representatives of the UN human rights agency were able to visit Sembel prison, but observation by international bodies must be maintained and significantly extended.

The ethical case for these conditions is clear from a human rights perspective. But if European policymakers have learnt anything by looking at the reasons so many people from Africa and the Middle East are fleeing their homes, the practical case should also be self-apparent.

Europe may hope that more aid and an unconditional re-engagement with Eritrea will help stem the flow of people to its shores, but it will ultimately do more harm than good if it only serves to strengthen a repressive and unpopular regime rather than reform it.

Rufael Tecle is an Eritrean-American law graduate from the University of Texas. He can be reached on Twitter at @RufaelTecle.