Dear Eritrean friends and supporters of Eritrean Justice Seekers, We chose to stand and raise our voices today, to bring our concerns to the attention of the Norwegian Peace Nobel Committee and the International community about 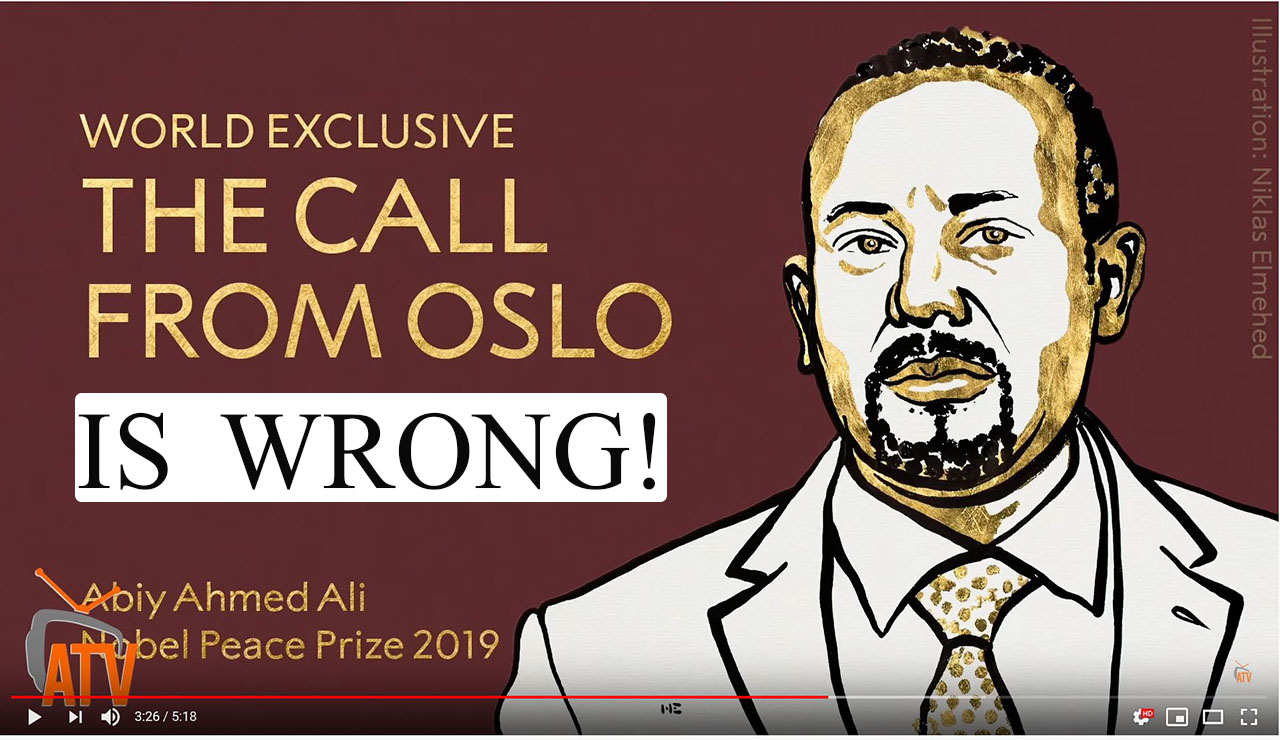 We chose to stand and raise our voices today, to bring our concerns to the attention of the Norwegian Peace Nobel Committee and the International community about the misery and severities of the life of the Eritrean people.

Despite the Committee´s well-meaning intentions, we feel that it was a rushed decision to award Prime Minster Abiy with a Nobel peace prize. The Nobel Peace Prize Committee underlined for the motivation of its decision to be: “… in particular for his decisive initiative to resolve the border conflict with neighbouring Eritrea”.

We don’t only question the viability of the said agreement and peace, but also its intentions. Now, many Eritreans and Ethiopians are questioning if the peace accord was a sincere effort intended to put an end to the border dispute and the woes of the peoples concerned. Yes, peace could be achieved, and livelihoods improved through peace processes, only if the feuding parties really mean to respect and implement it.

Let’s just say the issue is out of ordinary cases. Making agreements with a tyrant, excluding the people concerned from information and participation in the decisions made should be a recipe for failure.  This is simply a serious betrayal of the principles of Human rights, and history will be very merciless against the violators of these principles.

An elected leader of a neighbouring country, Nobel Committee Peace Prize Laurent Dr Abi, is expected to be fully aware of the misery of the Eritrean people who are suffering under the brutal dictatorship of President Isaias.  The Eritrean people are gravely disappointed with Dr. Abiy who embraced the world known brutal dictator as his close personal friend and as his ally.  How could Dr. Abiy, who professes love, democracy, peace and freedom be a friend of such a ruthless dictator?

Let me say it clearly; Eritreans welcome to have a peaceful neighbourly relations with Ethiopia. We are not against economic cooperation with Ethiopia. In fact, we see it as something imperative. However, that cooperation should be governed by rules and principles, and mutual respect.

Our concern is that Eritrea does not have a government that accepts these principles and defends the national interests of the country. And we say that the right partner for Ethiopia is a government of the Eritrean people that has yet to come.

Will the two regimes delineate the boundary which has been the main bone of contention between the two countries for a long time? Now we can confidently say that demarcation is a subject matter that is conveniently forgotten. Ethiopia, the country of Dr. Abi Ahmed still occupies all the territory such as Badme and environs awarded to Eritrea.

Border crossings, which are much more important when it comes to public transportation and movement of goods, and which were opened with a lot of fanfare, have recently been closed again.

The “peace agreement” was supposed to change people’s livelihoods, putting an end to the open-ended nature of the national service; and bring peace and hope to the Eritrean and Ethiopian peoples.  But it hasn’t.  Instead Eritrea is still being governed with an iron fist and utmost secrecy.  The Tyrant Isaias continues to rule as if Eritrea is his personal property. Sadly, Eritrea has become a country where events are orchestrated, and its citizens are kept quiet as government officials depict false realities.

The human rights and political situation in Eritrea is very worrisome: clear patterns of grave violations of human rights, absence of Rule of Law and arbitrary detention, torture and disappearances still take place.

It does not make any sense to expect the Eritrean people to support Dr. Abiy’s Peace Prize Award and his ‘Medemer’ philosophy that takes aim only at the Eritrean ports and supports the tyrannical rule of Isaias. In his recently published book, ‘Medemer’, Dr. Abiy wrote about his colonial dreams, and he explicitly stated that the 1000km long Read sea coast line is Ethiopian natural resource that it should use for its economic and military advantage. (Medmer, page 262).

The Eritrean people have sacrificed so much to achieve their sovereignty at the cost of over 65,000 lives.  But Dr.  Abiy does not seem to respect Eritrean sovereignty.  It is now becoming obvious that the peace deal he signed with Isaias is motivated by his dream to provide free access to Ethiopia and its naval forces without any regard to the interest of the Eritrean people.

The Eritrean people are for peaceful coexistence with our neighbour Ethiopia, and that is why there was so much jubilation when Dr. Abiy officially announced his unconditional acceptance of the decision of the International Boundary Resolution Commission.  Unfortunately, the peace deal, which Isaias signed without any input from his cabinet or the Eritrean people has proved to be a phony peace agreement that has not yielded any peace dividend to the Eritrean people.

The Eritrean people’s initial positive jubilation was based on the anticipation of serious reforms similar to those Dr. Abily boldly introduced in Ethiopia, such as freeing political prisoners, lifting the state of emergency, allowing political parties  and media outlets to freely return and operate in their county. Eritreans’ hoped the peace deal with lead to the implementation of the ratified constitution, the release of political prisoners, newspaper editors, those who have been languishing in inhuman prison for over 20 years.  The Eritrean youth hoped there will be an end to the endless national service that amounts to virtual slavery that drove many young Eritreans to flee the country where many perished in the deserts of Sahara and Sinai and drowned in the Mediterranean Sea. According to the UN refugee agency, Eritrean refugee numbers worldwide, 2014-18, has surpassed half a million   In fact, things have gone worse since the peace deal was signed between Dr. Abiy and President Isaias Afeworki.  No substantive work has been undertaken to normalise relations between the two countries since the signing of the “Peace Accord”.

Unfortunately, by awarding Abiy the most prestigious Peace Nobel prize, Norway, is reminding Eritreans  of what the Government of Norway did in December 1950 (69 years ago) when it became the only country at the UN that voted for the annexation of Eritrea by Ethiopia. By awarding the Noble Peace Prize to Dr. Abiy Ahmed, you are scratching long healed wounds.

On a positive note, we would like to let the Norwegian people that Eritrean people are grateful for what the Government of Norway has done to accommodate and to give a safe haven to a large population of Eritrean refugees. We would also like to to appeal to the Norwegian Government to assist the Eritrean people in the endeavours they are making to democratize their country.

Victory to the Eritrean people!

May the friendship between Norway and  democratic Eritrea flourish

For Eritrean League for justice and democratic change in Gothenburg and