By BRITTANY PENLAND - McClatchy Newspapers CHARLOTTE, N.C. - As a daughter of freedom fighters from East Africa, Meron Fessehaye understands the importance of independence, she said. Her father, an Eritrean native, volunteered as a medical aide, 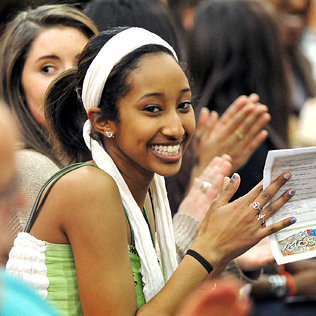 CHARLOTTE, N.C. – As a daughter of freedom fighters from East Africa, Meron Fessehaye understands the importance of independence, she said.

Her father, an Eritrean native, volunteered as a medical aide, helping Eritrean wounded during the fight for independence from Ethiopia. Her mother was a refugee in Nairobi, Kenya, after fleeing Eritrea.

The older Meron becomes, the more her parents share with her about the struggles of life as immigrants, she said.
“My father came to America in 1985 with not much money,” said Meron, a senior at Charlotte Latin school. “He came here seeking political asylum.”

Eritrea, located in the Horn of Africa and bordering the Red Sea, is home to about 6 million people. But about 1 million Eritreans are in exile, banished from their homeland, according to the CIA website.

Meron’s parents had an arranged marriage in Africa in 1993 and today live in Charlotte, N.C. Her father works as a taxi driver and her mother stays at home to tend to Meron and her younger sisters.

When Meron considers her daily life and what seems to be a struggle, she admires the strength of her parents, she said.

As a child, Meron said, her first challenge came in middle school, when she felt she was not reaching her potential. She was often bullied for her culture, she said. Realizing she wanted a new environment, Meron sought out information about Charlotte Latin after hearing about the school from an Eritrean family friend.

“Charlotte Latin was some distant fairy tale in my mind,” she said. “I don’t even think I had been that far down Providence Road before.”

Meron said she understood her family could not afford the school, but she was determined to find scholarship opportunities.

At age 13, all on her own, she sat down at her computer and filled out the enrollment application, occasionally asking her parents questions, such as: “What are your child’s strengths?” Part of the application also required financial aid requests and scholarship essays. She completed these on her own.

Being a self-starter “comes with that immigrant mentality,” she said. “I’ve been independent since Day One, so (financial aid forms) were the least of my worries.”

After an on-site interview, Meron quickly heard back that she was accepted. “It was the happiest day of my life,” she said.

Meron has often felt teachers were among her best friends, because they were willing to listen to her ideas. Now 17, Meron can be found having lunch with teachers in the history department, she said.

“Meron is so excited about the world … and takes every opportunity,” said Jackie Fishman, Meron’s English teacher. “And she has this deep understanding of the essence of life from her family.”

Fishman can relate to the hardships the Fessehaye family has encountered, she said, because she is the daughter of a Holocaust survivor. “We are both children of terror and trauma,” Fishman said. “We’ve always understood each other well.”

Because her parents so value education, Meron said, she rarely leaves home unless it is for a school-related activity. So, she has joined everything she could – cross-country, theater, Odyssey of the Mind, newspaper, choir – and she also was elected student body vice president. She even won homecoming queen.

“I would join everything because I wanted to get out of the house and socialize,” she said. “It also gave me the chance to meet new people.”

One of the more important clubs to her is the Mosaic Club, she said. There, students from a variety of cultures and backgrounds come together to discuss ideas and promote diversity.

“I’m in a very homogeneous community, so people who are different stand out,” Meron said. “So Mosaic Club really became a refuge for me, and it was that place where I felt I could express my emotions.”

“I am the daughter of working-class immigrants. I am who I am because that’s who God made me,” she said. “And if I don’t take pride in who I am, then no one will ever believe me – and that’s how you get far in life.”

Fun fact: To help herself remember material for tests, she says it aloud – in a British accent.

Speaks: English and Tigrinya, the native language of Eritrea.

Role model: “My father … he sacrificed everything for us to come here. … He’s empowered himself by taking any job he can to raise me and my sisters.”

Advice to kids: “Be yourself. Embrace who you are.”

Hopes to major in: Environmental studies. “Being a woman in a third-world country can hinder you, because of societal standards that you have to have babies and not have an education. … That can have an environmental implication.”

Its website describes it as “a student-led organization whose mission is to raise awareness of multicultural and multi-ethnic issues on campus and to encourage involvement in school and community activities that afford interaction with varied groups of peers.”