Curfews and state of emergencies have been imposed on several Sudanese cities while security forces have been deployed around the country on Friday, after a third day of major anti-austerity protests that have seen eight 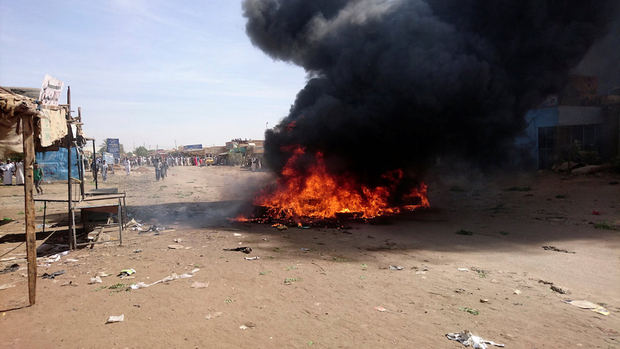 Curfews and state of emergencies have been imposed on several Sudanese cities while security forces have been deployed around the country on Friday, after a third day of major anti-austerity protests that have seen eight people killed.

Sudanese companies have also reportedly blocked social media services used to share information about the demonstrations fueled by a recent tripling in the price of bread amid an economic crisis.

Simmering tensions about bread shortages erupted on Wednesday when protesters in Atbara, a hub for Sudanese workers, set fire to the ruling National Congress Party’s offices.

That image was quickly shared and was followed by protesters also torching down the party’s offices in Dongola yesterday.

Northern state announced a curfew and state of emergency in the cities of Dongola and Karima, following similar measures announced in Atbara and al-Qatarif.

“Peaceful protests were deviated from their path and turned into a subversive activity targeting institutions, public and private property through arson and destruction,” he said, in a statement published on the official Sudan News Agency.

Police had stepped up their presence outside Khartoum’s main mosques ahead of an anticipated third day of demonstrations.

Translation: Protesters come out on the streets of Omdurman’s al-Hijra neighbourhood in protest against the deteriorating economic situation in Sudan

Thousands of people gathered in Atbara, the initial focal point of protests, but spread to other cities in the country, including the capital Khartoum where police used tear gas to disperse a march near the presidential palace.

Atbara, which has been the focal point of protests, is popularly known as the “City of Steel and Fire” because of its historical importance to the country’s railways and an active railworkers’ union that was dismantled under military rule in the 1980s.

The protests have been fuelled by a rise in the cost of bread and shortages of supplies amid an ongoing economic crisis that led to President Omar al-Bashir announcing austerity measures in September.

The government has responded by insisting the significant subsidies on bread prices will not be lifted, despite an earlier decision.

Sudan’s economy was hit hard when the south of the country seceded in 2011. With the secession, Sudan lost three-quarters of its oil output, a crucial source of foreign currency.

In October, Sudan sharply devalued its currency after the government asked a body of banks and money changers to set the exchange rate on a daily basis.

The move led to more price increases and a liquidity crunch, even while the gap between the official and black market rates has continued to widen.

At least three people were killed during similar protests against rising bread prices in January.