Source: Christian Solidarity Worldwide There are renewed questions regarding the current status of Patriarch Antonios of the Eritrean Orthodox Church, after he failed to deliver the traditional televised Geez New Year blessing on 11 September. Geez New 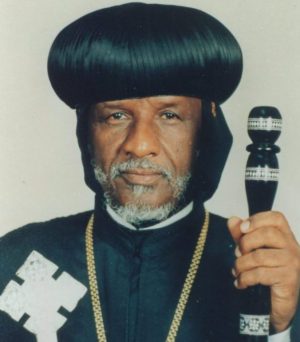 The patriarch’s reappearance in public at a church service on 16 July sparked speculation about his imminent release from house arrest and reinstatement to office. He has been under house arrest since January 2007, after being removed from office, in violation of canon law, for repeatedly objecting to government interference in ecclesiastical affairs.

At the church service, the patriarch was not permitted to speak, despite being overheard asking for the opportunity to address the congregation. Instead, he was swiftly ushered off the premises and placed under house arrest at a new location.

Christian Solidarity Worldwide’s sources report that as the clamour to hear from the patriarch grew, a heavily-edited video of the patriarch speaking to “workers of the patriarchate” was released. Fresh photographs of the patriarch blessing selected visitors have also surfaced. However, scepticism surrounding the manner and terms of his release has deepened after the blessing for Geez New Year was delivered by Bishop Lukas, a pro-government cleric who is generally considered to harbour ambitions of being the next patriarch.

According to CSW’s sources, the fact that Patriarch Antonios did not deliver the New Year message “is the biggest sign that he is still not restored fully to his position. Under canon law, if a patriarch is around, a bishop should not give the benediction.” It is also seen as further confirmation that the patriarch’s apparent release was a ruse by the government to offset international criticism by giving the impression of an improvement in human rights, as well as to ease the path to succession for Bishop Lukas.

CSW’s Chief Executive Mervyn Thomas said: “Our thoughts and prayers are with Patriarch Antonios, as he remains surrounded by people who do not have his best interests at heart. There appears to have been no real change in his circumstances, and, despite being able to receive selected visitors, Abune Antonios is neither truly free nor fully reinstated to his rightful office. If he is indeed free, then the Eritrean government must permit the EU Delegation and other members of the international community with a diplomatic presence in Asmara to visit the patriarch and monitor his wellbeing.”

The patriarch is among over 10,000 prisoners of conscience in Eritrea, several hundred of whom are Christians. A surge in repression since May has seen over 200 Christians detained in remote desert areas, following a series of house to house raids in different cities. In August, mother of four Fikadu Debesay, who had been detained in these raids, died from untreated kidney complications. Her husband and 18 year-old son were also detained, leaving the three youngest children alone. In response to the growing persecution, Eritrean Christians are calling for 18 September to be marked as a day of prayer and fasting for their nation.

Mervyn Thomas added: “The 18th of September is significant as it marks the day in 2001 when pro-reform politicians and independent journalists were detained incommunicado and indefinitely in secret detention facilities, where several are thought to have died. That was the day rights and freedoms were curtailed and comprehensive repression began in earnest in Eritrea. CSW counts it a privilege to join in prayer for the nation, and to remember Fikadu Debesay, her family and all the other victims and prisoners of conscience on that day.”