To mark World Day Against Cyber-Censorship, Reporters Without Borders (RSF) is today launching Operation Collateral Freedom #2, in which it is unblocking access to websites that are censored in five countries and is unveiling the 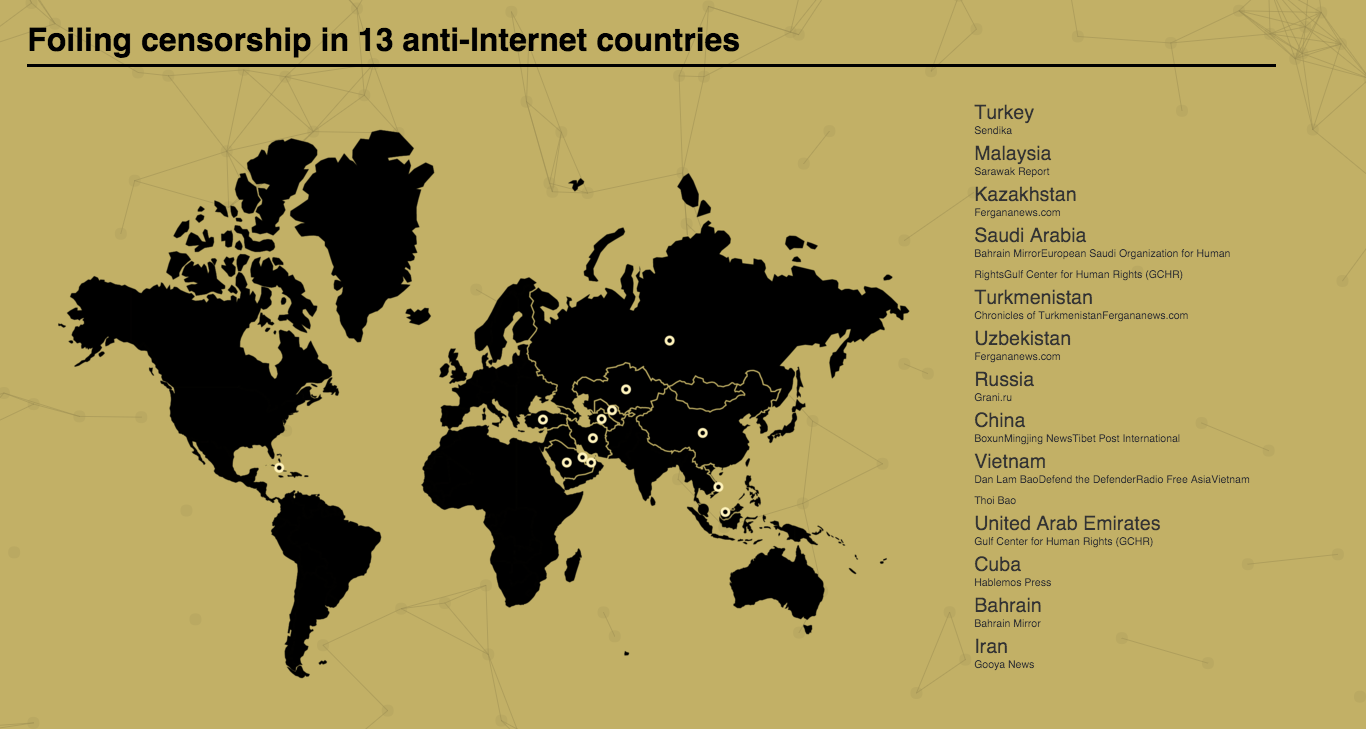 To mark World Day Against Cyber-Censorship, Reporters Without Borders (RSF) is today launching Operation Collateral Freedom #2, in which it is unblocking access to websites that are censored in five countries and is unveiling the RSF Censorship Detector app.

The aim of this operation – the continuation of Operation Collateral Freedom #1, launched a year ago – is to make online information accessible in countries where it is banned and to dissuade “Enemies of the Internet” from targeting news websites.

After unblocking 11 news websites in 2015, RSF is now providing access to six other sites that are blocked in their respective countries – Radio Free Asia and Defend the Defenders (Vietnam), Sarawak Report (Malaysia), Boxun (China), Sendika.org (Turkey) and the European Saudi Organization for Human Rights (Saudi Arabia).

The operation is based on the technique of mirroring. RSF creates a “mirror” copy of the blocked site on a cloud hosting service provided by a major Internet company such as Fastly, Amazon, Microsoft or Google. To block access to the mirror, a government would at the same time deprive thousands of its country’s companies of the essential technological services provided by these Internet giants. This “collateral” economic and political damage would be hard to justify.

This year, RSF is breaking new ground by providing the public with an exclusive application developed specially for this operation. The developers, Brendan Abolivier and Clément Salaün, have created an extension to the Google Chrome browser that facilitates access to the mirror version of the targeted sites. Whoever goes to one of these blocked sites will see the icon of the RSF Censorship Detector app turn red. By clicking on it, they will be automatically redirected to RSF’s unblocked mirror.

In the past year, the servers dedicated to Operation Collateral Freedom have handled more than 64 million requests and provided more than 587GB of data. During the first few days, the operation’s success forced RSF to expand the capacity of the servers in order to handle the massive volume of traffic.

Since then, RSF has created other mirrors and is using additional hosting services. As a result, it is able to create an alternative mirror if a country decides to block all the services of one of the companies used. The list of mirrors and services employed is regularly updated on github.com. RSF will keep Operation Collateral Freedom going for as long as the resources available allow.

You can assist this operation by:

Sharing this information with the #CollateralFreedom hashtag and by spreading the word about these blocked sites Making a donation so that we can continue to fund this operation Malaysia, Turkey, Saudi Arabia, Vietnam and China are ranked 147th, 149th, 164th, 175th and 176th respectively (out of a total of 180 countries) in RSF’s 2015 World Press Freedom Index.