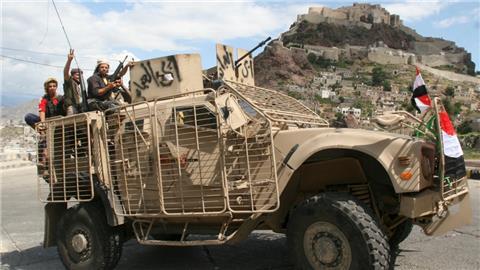 Yemeni forces backed by the Saudi-led coalition have launched an offensive to retake the key battleground province of Taiz from Houthi rebels, a military commander told AFP news agency.

Forces loyal to President Abd-Rabbu Mansour Hadi have been pressing to recapture parts of Yemen seized by the Shia Houthi rebels who overran the capital last September and then advanced south.

Taiz, which is Yemen’s third-largest city, has been the site of intensified air strikes by the Saudi-led coalition as forces loyal to Hadi clashed with Houthi fighters.

Sudanese forces from the strategic al-Anad airbase in Lahij are taking part in the Taiz operations, according to sources.

“The military operation to liberate Taiz has begun after the arrival of military reinforcements from the Arab coalition, resistance forces and the national army in the south and west of Taiz province,” General Ahmed al-Yafie, commander of the fourth military region, told AFP.

At least 1,300 civilians have been killed in violence that has increased over the past few weeks, the Local Monitor’s Network in Taiz reported last week.

Taiz is seen as a gateway to controlling the rebel-held capital and military officials confirmed the coalition sent major reinforcements, including armoured demining vehicles, before they advanced towards the city.

While loyalist forces are present in Taiz, the rebels and troops loyal to former president Ali Abdullah Saleh control the main roads leading into the city. Sources added that coalition troops are deployed in Dhubab along the coast in a bid to advance on to the rebel-held Red sea city of Mocha, a part of Taiz province.

At least 5,600 people have been killed in the seven months of war in Yemen.

According to the UN, the humanitarian situation, exacerbated by the Arab coalition’s blockade of Yemeni ports, is worsening on a daily basis.

A new round of UN-brokered Yemen talks to end the conflict is expected to take place in Geneva later this month.