One person was seriously wounded and three others lightly wounded in a brawl between asylum seekers in south Tel Aviv on Tuesday. Police arrested 11 people in the second such clash in as many days. About 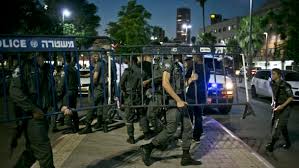 One person was seriously wounded and three others lightly wounded in a brawl between asylum seekers in south Tel Aviv on Tuesday.

Police arrested 11 people in the second such clash in as many days. About 20 people participated in Tuesday’s altercation, throwing stones and smashing the windows of a bus. Some people were stabbed.

Police suspect the brawl was between supporters and opponents of the Eritrean government. “A large force from the Tel Aviv District Police is present at the site dealing with the incident so as to restore order,” police said in a statement.

The seriously wounded person, who was stabbed in the head, is currently on a respirator in Tel Aviv’s Ichilov Hospital. Two of the lightly wounded were released from the hospital Tuesday night.

The earlier brawl, which involved dozens of Eritrean asylum seekers, broke out in south Tel Aviv late Sunday night. It, too, was apparently between supporters and opponents of the regime. Police arrested 13 people.

There has been friction between the two factions before, but Sunday night’s fight was unusual. Police said the men threw stones and bottles, breaking some nearby display windows. Several participants were wounded, as was one policeman.

“The government, by its weakness and its decision not to decide, has, with its own hands, made the situation in south Tel Aviv unbearable and made residents’ lives hell,” said Shlomo Maslawi, a Tel Aviv city councilman and chairman of a south Tel Aviv neighborhood association, after Tuesday’s brawl. He added that it must “get the infiltrators out of south Tel Aviv one way or another.”

But people who oppose deporting asylum seekers countered with a demonstration in Tel Aviv’s Levinsky Park later that night to demand that they be absorbed in Israel. “It’s possible to prevent the deportation and rehabilitate south Tel Aviv,” former Finance Ministry Director General Yoram Ariav told the demonstrators. “It’s not either/or.”

Dr. Rami Gudovitch, a joint director of the Come True project, which sends children of asylum seekers deported from Israel to school, told Haaretz that representatives of the Eritrean government have for years been violently targeting those who fled the country to seek refuge in Israel. He speculated that the recent upsurge in violence is due to the arrival of a new Eritrean ambassador to Israel. He added that the Dutch parliament recently voted to expel Eritrean diplomats from the Netherlands after evidence showed that they were intimidating and extorting Eritrean asylum seekers in that country.

“Something similar is happening in Israel,” Gudovitch said. “Representatives of the dictatorship are working in Israel against the refugees who fled and are undermining Israeli sovereignty.” The government, he added, must therefore take action against them.

Police said they have recently noticed an increase in violence involving asylum seekers, particularly since hundreds were released from the open detention facility in Holot in mid-March. Most of the violence has pitted asylum seekers against each other. But Israeli residents of south Tel Aviv also say they have noticed more violence in their neighborhoods in recent weeks, especially in the Hatikva and Neveh Sha’anan neighborhoods.

Emmanuel Yamin, a leader of the asylum seekers’ community, told Haaretz on Monday that the violent incidents began only a few days ago, sparked by tensions arising from the fact that Eritrea recently observed its Independence Day.

“The vast majority of the asylum seekers are opponents who fled the dictatorial regime to obtain protection in Israel,” he said. “But there’s a small group of people who support the regime and live among us, and they’re trying to inflame the area and create violence.”