Are we or Isaias to be blamed if Eritrea loses its sovereignty?

Are we or Isaias to be blamed if Eritrea loses its sovereignty? By Goitom Emam Beyen 10/1/2018   Franklin D. Roosevelt once said, “The liberty of a democracy is not safe if the people tolerated the growth of private 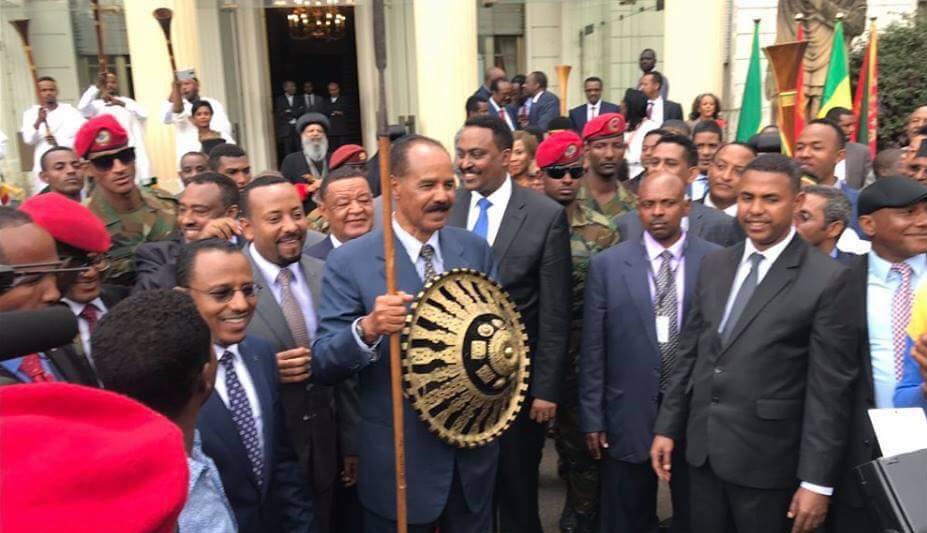 Are we or Isaias to be blamed if Eritrea loses its sovereignty?

Franklin D. Roosevelt once said, “The liberty of a democracy is not safe if the people tolerated the growth of private power to a point where it becomes stronger than the democratic state itself. That in its essence is fascism: ownership of government by an individual, by a group, or any controlling private power”.

This quote by President Roosevelt directly applies to the current state of Eritrea. We the people have nourished, appeased and tolerated the Isaias regime for almost three decades. We fear the government instead of the government fears its people. You can even hardly call it a government where an unhinged individual who uses the country as a toy for his self-indulgence and amusement depending on his mood of the day. Our partisan politics and having timid Eritrean scholars and lack of investigative reporting have allowed Isaias to do whatever he wishes in the name of the country. Can’t our scholars learn from the Tigrai conference of 500 scholars with Doctorate degree held in Mekele few months ago?

Our people in general became a follower instead of maker of his own destiny. The people goes to war and make peace when the dictator say so. Sometimes I wonder, Is this the Eritrean People who bravely fought and won the mighty Ethiopian colonial power supported by both Super Powers? Have we forgotten all the sacrifice and struggle was for freedom and justice and mainly for Eritrea to be independent as a sovereign nation? Now, we all can agree that Eritrea is in the control of one unstable, shrewd and secretive narcissist individual where his main interest is prolonging his power at any cost. The question to the Eritrean People at this critical juncture is – do you trust Isaias enough to not compromise the sovereignty of the nation and protect the interest of the Eritrean People? Are we ready to gamble on him while the stakes are high and maybe high enough where his actions and damages cannot get reversed?

Have we forgotten the significance of the “Treaty of Wichale” of May 2nd of 1889 where Menelik II negotiated on behalf of Ethiopia to have a treaty with Italy which is the origin of the Italian colony and modern state of Eritrea? What prevents Isaias in reversing the 1889 treaty and federate, confederate or annex Eritrea with Ethiopia either to protect his power from collapsing or somewhat speculated by some to fulfill his overall objective of him joining the Eritrean revolution for a borderless Eritrea with Ethiopia. In “Eritrea at a Crossroads”, Andebrhan Welde Giorgis’s book page 322 reads “In one incident, Isayas blurted, ‘I know that you call me Agame behind my back. I will show you! I will take this country down as I put it up.”  I understand that this might have been said when Isaias was drunk, but we all know drunk people speak from the heart that are kept hidden. Isaias can accomplish his aim by disguising in the name of peace, treaty, intimate relationship and cooperation with Ethiopia and other neighboring countries. There are many instances that make you suspicious of Isaias that needs objective research and investigative reporting about Isaias’s plan and end-game. It is undisputable and we all can agree that Isaias wants to stay in power at any cost, but the main question is for what purpose?  Can we take a blind eye to the following claims of historical events and questionable instances that was told about Isaias whether true or false?

Isaias, do not disqualify him to be an Eritrean President for having a Tigray heritage or an Ethiopian Origin since he was born in Eritrea. I am more concerned about his actions which is ruining the State of Eritrea in which he may have been influenced by his own heritage, origins and his love to power.

Whether we like it or not, Isaias is fulfilling his objectives and aspirations. The question is at what cost and what do we do about it? I am not claiming that the above 8 example claims are 100% true, but at least we should have been curious enough to research and investigate whether they are true or not. Our scholars failed in using their knowledge in helping educate the public about the inner making, ambition, history and end goal of Isaias Afeweki Abraha Hagos Mirach. Our psychologists failed to tell us about the mental competency of this narcissist individual whether he is fit to govern a country. The worst that could happen to a country is to be governed by a mentally sick person. In this scenario, it is the people to be blamed not Isaias. At least, he can get a defense that for being sick.

When you ask supporters of the Eritrean Government (I think it is better to say when you ask supporters of the one man dictatorial regime) to explain where our country is heading and the nature of intimate relationship and peace honeymoon with Ethiopia, their only answer happen to be “President Isaias knows what he is doing”. If this is the only answer they got, Eritrea and the Eritrean people are in deep trouble. In other words, they do not know what he is doing and their only comfort zone their blind faith on him. As President Roosevelt noted, this is really sad when the people tolerate the abuse of power, the secrecy of treaties and put all your eggs in the hand of this man.

I am an advocator for working together for the common objective and a believer of an honest and committed grassroots people’s movement with bottom up approach of organizing and representation. Our priority at this juncture is not democracy, it is saving the nation in maintaining its sovereignty and preventing from catastrophic people’s eradication leaving the country in droves. I have been sidelined voluntarily the last two years due to the lack of action of the opposition and the squabble within itself for unnecessary non-priority issues of power struggle. I get disappointed for some scholars for creating chaos by creating parallel grassroots movement in the name of “Global Initiative” instead of trying to strengthen the existing grassroots movement.

Now, I felt obligated and it is my civic duty to call the Eritrean people to get organized and mobilized to save the nation before it is too late. Not only I am calling the opposition to work together but I am also calling the supporters of the Eritrean government in joining and working together in saving the nation before it is too late. The partisan bickering do not have place at this critical period, it is time for action based on agreeable plan and roadmap in getting rid of this individual and his inner circle group intentionally carrying his plans of eradication of the Eritrean People and endangering the sovereignty of the nation. Isaias is using the divide of the people as if we have two different interests. We all love of our country and people and we need to have a united message of ENOUGH is ENOUGH to Isaias.

If we fail to do so jointly and quickly, it is we the people to be blamed not Isaias.