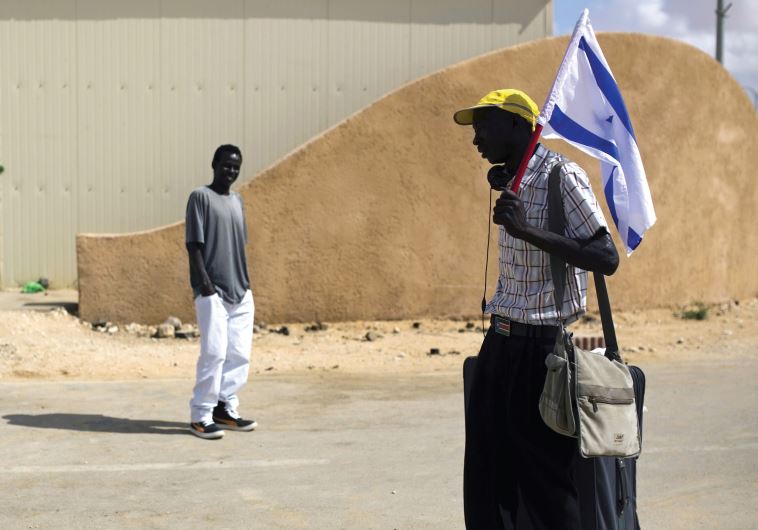 The Holot detention center for illegal African migrants may soon have a celebrity “resident.”

Father Semere, the Eritrean Orthodox Tewahdo Church’s senior leader in the Middle East and a published theological author and lecturer, was summoned by the Interior Ministry in October to present himself to Holot by November 11, according to the Hotline for Refugees and Migrants.

Semere has resisted the summons, and while he has various appeals pending which could save him from Holot, law enforcement could pick him up at any time.

How could a distinguished religious leader be endangered of being placed in Holot’s open detention center, as if he was just one of the other approximately 45,000 African migrants who arrived in Israel illegally? Doesn’t the state have exceptions for prominent community leaders? The answer, at least in this case, is unclear.

According to the Hotline for Refugees and Migrants and Semere’s lawyers, Michal Pomeranz and Idan Moldavski through HIAS – Hebrew Sheltering and Immigrant Aid Society, Semere’s sect has been outlawed in Eritrea.  Semere was persecuted there for the sect’s and his unwillingness to support the Eritrean regime’s dictatorial tendencies.

Some of these tendencies include informing on and turning in church-members and others on the regime’s blacklist, a list which most of the world criticizes as arbitrary, unjustified and anti-democratic.

The hotline said Semere has even been physically roughedup by elements connected to the regime.

Due to this persecution, Semere fled Eritrea and crossed illegally into Israel from Egypt on October 30, 2010.

Like most illegal African migrants, he spent two weeks in detention before he was released.

Since then, Semere has been a religious focal point for Eritreans in the country, giving lectures, performing weddings and other religious ceremonies and directing other religious figures of his church within Israel.

Fr. Athanasius Ghebre-Ab, a leading official of the same church in North America, sent a letter in support of Semere on November 10, saying Semere “presently undertakes the spiritual needs of the large Eritrean community throughout Israel.

We consider his work indispensable for the spiritual and emotional needs of his community.

I have seen the tireless work he performs day and night, and his immense contributions to a community that is in such dire straits.”

But so far, Semere’s appeals – to President Reuven Rivlin, the Tel Aviv District Court, the Interior Ministry, the Religion Affairs Division of the Interior Ministry and a special court reviewing appeals against the ministry – to exempt him from detention due to his status as a religious figure have gotten him nowhere.

At every turn he has been told that he cannot get an exemption because Israel cannot recognize him as a religious figure.

Why? Because under Israeli law, the state only recognizes someone as a foreign religious leader if their country of origin provides official confirmation of the religious figure’s status.

Of course, in this case, this creates a vicious cycle.

Semere fled Eritrea because of the regime’s oppressive tendencies, including the outlaw of his church. So Eritrea is not about to send Semere confirmation of any kind.

According to the hotline, Semere would have difficulty living in Holot as he has an obligation to only be around people in his ceremonial garb and as his church has no prayer area at the detention center.

During the two weeks that he was detained when he first entered the country in 2010, he slept on the sand to maintain his modesty, solitary and other commitments.

Should Israel effectively support Eritrea’s oppression of religious freedom by holding this against Semere? This is the substantive question one would think that the courts, the Justice Ministry, Rivlin and the Religious Affairs Ministry would be struggling with.

To date, the Tel Aviv District Court has not issued a final ruling, but it has rejected Semere’s request to suspend the detention order pending its final ruling – leaving Semere exposed for the time-being.

The court has criticized Semere on procedural grounds for not having applied to the government for recognition as a religious figure until he was close to being detained, despite residing in Israel since 2010.

But if that procedural issue is the only problem, then his current application for that status, even if late in the game, could be viewed as curing a technical defect which would be sufficient to block the detention order.

There could be more at stake.

The bedrock principles of the various state policies for migrants over the last several years have been to detain them and then offer them money for voluntary deportation.

Making exceptions for religious figures might undermine that policy and also send a message that the state is trying to support the Eritrean community laying down ties in Israel, when that appears to be the opposite of the state’s goals.

Also, the state has aligned itself with a group of European countries who are declaring that many of the migrants could return to Eritrea without being persecuted as they are only here to find better jobs.

Recognizing Semere when he is not recognized in Eritrea sends an awkward or mixed message about Eritrea and persecution.

Asked for clarification, the Justice Ministry did not respond by press time.

The Religious Affairs Division of the Interior Ministry did not respond to a request for comment.

The race is on for whether Semere will get protected status, be rejected, or be detained with the issue still undecided.