Strasbourg rules Italy's practice of intercepting boat migrants from Africa and handing them over to Libya was illegal Antoine Buyse for the ECHR blog, part of the Guardian Legal Network Last week the Grand Chamber of the 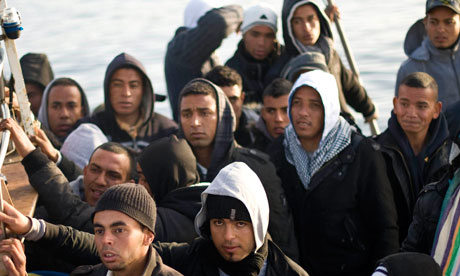 Antoine Buyse for the ECHR blog, part of the Guardian Legal Network

Last week the Grand Chamber of the European Court of Human Rights delivered judgment in an important case about one of the most topical migration issues: irregular migrants intercepted in the Mediterranean by ECHR state parties. In the case of Hirsi Jamaa and others, the court found, unanimously, that Italy had violated three Articles of the ECHR.

The applicants in the case were 11 Somalians and 13 Eritreans who had been intercepted by the Italian coastguard in May 2009 when trying to cross the Mediterranean. They were brought to Tripoli in Libya and handed over to the Libyan authorities under an Italo-Libyan agreement. Their identities were not checked during their time on board of the Italian vessels.

First, the Grand Chamber had to decide whether the applicants fell within Italy’s jurisdiction (Article 1 ECHR). Italy denied that by taking them on board it had exercised “absolute and exclusive control” over the applicants. Rather, it argued that it had been obliged under the UN Convention on the Law of the Sea to save human lives on the high seas. This in itself, in Italy’s view, did not create a jurisdictional link between Italy and the rescued.

The Grand Chamber disagreed. First, it confirmed that under the law of the sea, and under Italian law for that matter, a ship on the high seas is under the exclusive jurisdiction of the flag state. Secondly, states cannot avoid being held responsible under the ECHR by framing an act as a rescue operation under the law of the sea. Thirdly, the events took place on vessels of Italy’s armed forces manned by a crew of Italian military personnel. The applicants were thus under continuous and exclusive de jure and de facto control of Italy. Thus, they fell within the jurisdiction of that state for the whole period that they found themselves on those Italian vesssels. One could say here, that a causal legal chain of events starts to operate once a ship operated by a state party’s authorities catch sight of a group of people in danger at sea: the law of the sea requires to save them, and as a result these people are brought within the jurisdiction of that state under the ECHR. Put differently, any state attempt to push back irregular migration at sea rather than on land does not absolve a state from its human rights responsibilities.

Once this preliminary matter was solved, the court turned to the complaint of the violation of non-refoulement (the prohibition of being sent back to places where there is a real risk of inhuman or degrading treatment). The court found two violations of Article 3 ECHR. First, it concluded that Italy had violated the Convention by exposing the applicants to danger in Libya itself. According to many reliable UN, Council of Europe, and NGO sources, even in the spring of 2009, it was “well-known and easy to verify” (para. 131) that irregular migrants faced great dangers in Libya. The fact that Libya had assured Italy in a bilateral agreeement that it would deal with such migrants in conformity with international law did not detract from that. Crucially, even if the persons involved do not explicitly ask the state on whose ship they find themselves for asylum, it is still the state’s own obligation under the ECHR to check whether they would not face treatment in violation of article 3. Again, this is very important in practice: by just avoiding to even try to find out rescued people’s nationality or legal status, a state cannot avoid being held to account under the European convention. Secondly, it also found a violation by the fact that he applicants had been exposed to the risk of being sent onwards from Libya (the intermediary country) to their countries of origin: Somalia and Eritrea. It is for the state (para. 147):

First off, the court noted that both countries, Eritrea and Somalia, faced “widespread serious problems of insecurity” (para. 151). Secondly and crucially, Italy (para. 156):

knew or should have known that there were insufficient guarantees protecting the parties concerned from the risk of being arbitrarily returned to their countries of origin, having regard in particular to the lack of any asylum procedure and the impossibility of making the Libyan authorities recognise the refugee status granted by the UNHCR.

Thus states cannot simply wash their hands of a situation like this by failing to acquire information.

Also, the court for only the second time ever found a violation of the prohibition of collective expulsion of aliens (Article 4 of Protocol 4) – the first time was in 2002 in the case of Čonka v Belgium, on a group of expulsed Slovak Roma. In Hirsi Jamaa, the court for the first time had to decide whether this prohibition also applied to removing aliens extraterritorially. It answered that question in the affirmative: Article 4 Protocol 4 contains no reference to “territory” nor do the travaux préparatoires point in that direction. And then follows a very important paragraph in the court’s reasoning (para. 177):

The Court has already found that, according to the established case-law of the Commission and of the Court, the purpose of Article 4 of Protocol No. 4 is to prevent States being able to remove certain aliens without examining their personal circumstances and, consequently, without enabling them to put forward their arguments against the measure taken by the relevant authority. If, therefore, Article 4 of Protocol No. 4 were to apply only to collective expulsions from the national territory of the States Parties to the Convention, a significant component of contemporary migratory patterns would not fall within the ambit of that provision, notwithstanding the fact that the conduct it is intended to prohibit can occur outside national territory and in particular, as in the instant case, on the high seas. Article 4 would thus be ineffective in practice with regard to such situations, which, however, are on the increase. The consequence of that would be that migrants having taken to the sea, often risking their lives, and not having managed to reach the borders of a State, would not be entitled to an examination of their personal circumstances before being expelled, unlike those travelling by land.

Consequently, by not carrying out any form of individual assessment whatsoever of the persons involved, the handing over of the applicants to Libya from the Italian ship amounted to a collective expulsion.

Finally, the court found a violation of the right to an effective remedy (Article 13 ECHR) in conjunction with the aforementioned articles. The applicants had had no access to any procedure. There were no legal advisers or interpreters on board nor were they given information in general about what was going to happen.

As to the legal consequences, the court ruled under Article 46 of the Convention (obligation to abide by the court’s judgments, a provision not applied very often) that Italy (para. 211) “must take all possible steps to obtains assurances from the Libyan authorities that the applicants will not be subjected to treatment incompatible with Article 3 of the convention or arbitrarily repatriated.” In addition, each applicant was awarded, under Article 41 ECHR, 15,000 euros for non-pecuniary damage suffered.

The Portuguese judge, Pinto de Albuquerque, attached a long concurring opinion to the judgment which goes into the linkages between the international human rights law and international refugee law.

This was a very important judgment, upholding the absolute nature of the non-refoulement principle in the face of new ways of controlling migration flows by European states. It means that literally pushing back the problem further from a state’s territory does not change that state’s human rights obligations.