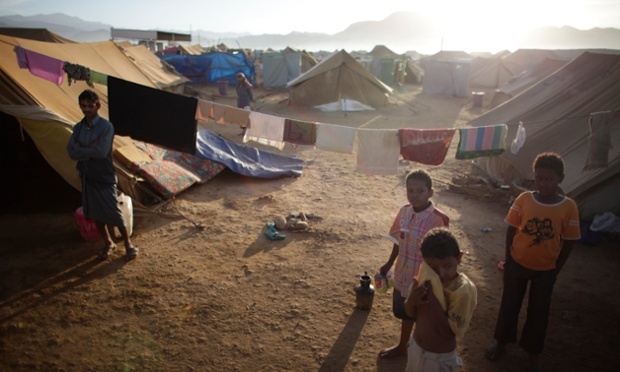 An air strike in Yemen by the Saudi-led coalition has killed at least 40 people and wounded about 200 at a camp for internal refugees, a human rights group has said.

Of the injured, 25 were severely injured in the raids, a spokesman for the International Organisation for Migration (IOM) told the Guardian.

Of the dead, three were government soldiers sent to protect the camp and two of the wounded were soldiers, said Joel Millman, IOM’s press officer.

The camp, known as al-Mazraq, houses about 5,000 people and was established in 2001 by the United Nations in Hajjah province to accommodate Yemenis displaced from the capital, Sana’a. Many of its residents suffer from malnourishment.

Those wounded in the raids, which took place at 3.30-4.30pm local time, were evacuated to medical facilities, the spokesman said. Humanitarian workers said the attack apparently targeted a nearby base for Houthi fighters.

One aid worker said earlier that the strike had hit a truck of Houthi militiamen at the gate to al-Mazraq camp, killing nine camp residents, two guards and an unknown number of fighters, Reuters reported.

The Yemeni foreign minister, Riyadh Yassin, blamed Houthi artillery for the explosion at the camp.

Saudi Arabia did not immediately respond to allegations of civilian casualties, but a spokesman for the coalition is expected to address the subject at the daily press briefing on the campaign in the Saudi defence ministry.

IOM’s security chief on the scene described seeing the strikes, one 500 metres from the IOM office, which shook the building and rattled nearby windows. IOM said a medical facility in the camp and the camp management building were hit in the attack.

IOM still has hundreds of staff on the ground in Yemen, including in Sa’ada, the Houthi stronghold in northern Yemen, where a coalition of Arab states led by Saudi Arabia launched a military intervention last week to stem the advance of rebels backed by Iran.

The Houthi rebels, who are members of the Zaydi Shia sect, took control of the capital Sana’a last year and placed its president, Abd-Rabbu Mansour Hadi, under house arrest.

Hadi escaped to his southern stronghold of Aden in early March, and the rebels attempted to storm his redoubt aided by troops loyal to the former president, Ali Abdullah Saleh, who was ousted after Arab spring-style protests in a deal negotiated by the Gulf states.

Hadi fled Aden to Riyadh late last week after calling for military intervention. The Saudi-led coalition began an aerial campaign in the early hours of Thursday, and have pledged to continue the air strikes until they achieve their objective of rescuing Hadi’s government.

The coalition, which is backed by the US, has not ruled out a ground invasion of Yemen to halt the Houthi advance. The campaign reflects the growing fears of Sunni Arab states at Iran’s growing influence in Yemen, Iraq, Syria and Lebanon.

An Arab summit over the weekend backed the Saudi-led intervention and pledged to create a unified military force that would respond to emergencies in the region.

On Monday, a senior Pakistani government official said his country would be sending troops to Saudi Arabia as part of the coalition, which also includes Egypt, the UAE, Qatar, Kuwait, Sudan and Morocco.

“We have already pledged full support to Saudi Arabia in its operation against rebels and will join the coalition,” the unnamed official was quoted by Reuters as saying.
The coalition claims it has established air superiority in Yemen and destroyed Houthi-held air defences, planes, military facilities and ammunition depots.

Saudi Arabia’s King Salman chaired a cabinet meeting on Monday afternoon in which he claimed the operations would enhance “international and regional peace and security”, and said the kingdom was ready to host talks between political factions that wanted peace in Yemen.

A statement read by the information minister, Adel al-Turaifi after the meeting said the aim of the campaign, named Decisive Storm, was to “protect Yemen and its people from the aggression of the Houthi militias that are supported by regional powers whose goal is to establish hegemony over Yemen and to make it a base for its influence in the region,” in a reference to Iran.