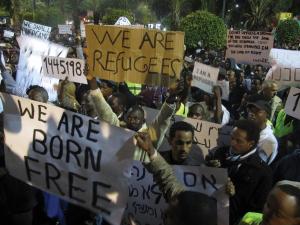 The Jewish Week : Tel Aviv — Solomon Gorgo, an Eritrean army deserter who came to Israel illegally five years ago, speaks fluent Hebrew and is the manager of the wait staff at a five-star hotel in Eilat.

So when he showed up last week at the local Interior Ministry office to renew his visa he was taken by surprise when he was instead served with an “invitation” — an order, actually, to report for an undetermined stay at a new Israeli “open detention” complex for African migrants. As he prepares to move to the Holot facility, he must leave his job at the hotel.

“I live without problems. Suddenly I got this letter, I’m in shock. I don’t know what to do,” said Gorgo. “I didn’t come here to look for work. I am a genuine refugee. They said, ‘Just show up on the 26th of January.’”

Just a few months ago, the prospects for African migrants, many of them asylum seekers from the civil strife taking place in Eritrea and Sudan, seemed to be looking up. A Supreme Court decision in September struck down Israel’s “anti-infiltration” legislation and called mandatory three-year jail terms for the African illegals unconstitutional and a violation of human rights. The ruling mandated freedom for some 1,811 migrants at the Saharonim jail near the border with Egypt.

However, the decision is a challenge to Prime Minister Benjamin Netanyahu’s policy of discouraging African migrants from coming and staying in Israel; African immigration is seen by the government as a “strategic” threat to Israel, both to its Jewish character and to its economy. There are about 60,000 Africans in Israel say they are fleeing political strife and persecution in either Eritrea or Sudan. But in the last two years, Israel, which considers the overwhelming majority of the Africans to be migrant laborers, has sealed its border to stop a flow that peaked in the hundreds per week.

Last November, in response to the September court decision, the Israeli parliament passed a revised version of the anti-infiltration law in November, reducing detention to one year and opening the facility in Holot, located in the desert near the border with Egypt.

African immigrants along with many others see the “open detention” facility as a de facto prison — even worse than the nearby Saharonim jail because there is no limit on how long then can be kept there. The residents must stay overnight at the complex, and be present for three roll calls during the day. Given that the nearest city of Beersheva is an hour away, that doesn’t leave much opportunity for contact with the outside world.

“The way [the legislation] is drafted today, it isn’t in the spirit of the 1951 convention” on refugees, said Sharon Harel, a protection officer from the Israel office of the United Nations High Commission on Refugees. She said that of the 1,400 requests for asylum submitted by detainees, only 200 have been finalized and no one has been recognized as a refugee.

As for the Holot complex, Harel said, “The facility looks more like another detention facility rather than an open center.”

Many believe the purpose of the Holot facility is to pressure Africans to consider a “voluntary return” to their home countries, to which they are provided with a plane ticket and a stipend to live on after returning. More than 1,000 South Sudanese have already opted to take the stipend and return.

The choice of remaining in detention or making a “voluntary return” is an “impossible” one, said Harel, because neither is particularly attractive. “We have doubts about how voluntary it is.”

In a Facebook exchange, a spokesman for Interior Minister Gideon Saar rejected the notion that the Holot facility operates as a prison. The facility enables Israel to enforce laws banning the employment of illegal African migrants (whose employment was tolerated by authorities even though they were never given official permission to work). Saar wrote, “This is a battle for the country and its future. We won’t give up.”

Meanwhile, residents of south Tel Aviv routinely complain that the Africans living in their neighborhoods are a source of crime and violence.

Israel began transferring Africans into the Holot complex about two weeks ago, but many of them have left. Dozens of Africans staged a 60-mile protest march two weeks ago along southern Israeli highways, and in Jerusalem across from the parliament, but they were eventually arrested by police and taken to jail.

A demonstration in Tel Aviv against the new regulations drew thousands of asylum seekers — the biggest turnout of migrants in recent memory. They chanted “Freedom!” and “No more jail” and held up signs invoking the passage from the Book of Exodus about respecting foreign populations, because “you were once strangers in a strange land.”

“The high court made a decision to release all us refugees,” said Abdel Munim Ahmed, a demonstrator who crossed illegally into Israel in June 2012 after fleeing Darfur. “But instead [the government] has transported us to anther prison,” he said.

According to the “invitation” to the Holot center that is served to migrants, “in the center you will be provided with suitable living conditions, including health and welfare benefits,” but on the other hand, “you will not be permitted to work.” Aid workers and migrants also complain that the Holot facility is guarded by personnel from the prison services.

The migrants say they are asylum seekers who have fled genocide or repressive governments, and cannot return, but very few have been recognized as such. Israeli government official say the vast majority simply seek jobs and plan to stay in Israel permanently.

Netanyahu touts his government’s construction of a border fence that has shut down the flow of thousands of illegals a month from Egypt, and says that encouraging the Africans to leave should now be a top priority.

However, the government’s handling of the Africans’ situation has raised concerns about human rights from U.S. officials and become a public relations problem abroad as well. A Western diplomat based in Tel Aviv said that Israel needs to work on its policy of handling the asylum seekers, and noted the wide gap between the 3 percent rate of Eritreans who get asylum status in Israel compared with the more than an 80 percent rate that exists worldwide.

Back in Eilat, Solomon Gorgo might have a chance to get asylum status. He said that as a teen in Eritrea he was kidnapped into army service, and after he fled for Israel his parents were arrested by authorities.

But he knows that he also faces some sort of detention in a month;  he says that he plans to report to Holot as per the “invitation” on Jan. 26.

“I go according to the law, and then afterward, I ask for my rights,” he said. “I thought this was an OK country. That it was an advanced country,” Gorgo said. “I didn’t think these things would happen in Israel.”