By: Mohammad Abu Fares Date of publication: 8 May, 2015 Analysis: Saudi Arabia has been cosying up to Eritrea, leading to reports the African nation will join Senegal in offering troops for the war in Yemen, 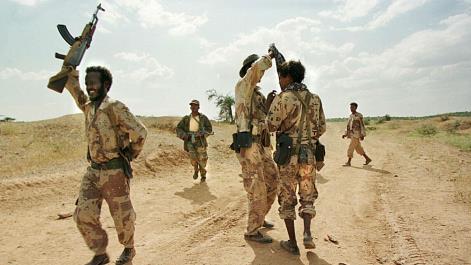 Analysis: Saudi Arabia has been cosying up to Eritrea, leading to reports the African nation will join Senegal in offering troops for the war in Yemen, says Mohammad Abu Fares.

Eritrea could be the second non-Arab African nation to contribute troops to the Saudi-led alliance against Houthi rebels in Yemen.

Eritrea’s president Isaias Afwerki visited Riyadh last week to meet King Salman and other leading Saudi officials. This has led many to believe that Eritrea could follow Senegal’s lead – the West African nation announced earlier this week that it would send 2,100 soldiers to join the Saudi alliance.

Sources in Asmara revealed to al-Araby al-Jadeed that talks between Eritrean and Saudi officials has brought them to a common understandings on a number of strategic and security related issues.

Sources expect an announcement on military cooperation between the two states, which would allow the alliance to use Eritrean airspace and seas.

It is also being said that Saudi is hoping to capitalise on the capabilities of the Eritrean armed forces.

Eritrea occupies an important geographically location on the Horn of Africa.

It lies just over the water from Yemen, looking over one of the most strategically important sea corridors in the world – where the Red Sea leads to the Suez Canal.

Eritrea would be an obvious launchpad for amphibious attacks if Saudi Arabia wanted to being a ground war.

Saudi Arabia has built good relations with three other Red Sea states share maritime borders with Yemen – Djibouti, Somalia and Ethiopia. Eritrea was the fourth piece in the jigsaw and has hosted foreign troops before.

Israel and Iran have military bases in Eritrea, but as the tide turns against the Tehran-backed Houthi militias in Yemen, Asmara appears to be cutting ties with these countries.

“Afwerki’s controversial relations have continued to be a source of angst for Saudi Arabia, which is just a strip of sea away from Eritrea,” said one Arab diplomat who wanted to remain anonymous.

“Saudi Arabia worries when Eritrean-Israeli relations progressed, which led to… the presence of Israeli bases in Dahlak and other Eritrean islands just off the Saudi coast. Relations between the two countries hit their lowest level.”

Eritrea was said to be, secretly at least, on the side of ally Iran and the Houthis during the Saudi-led assault on Yemen.

However, observers believe that Afwerki’s visit to Riyadh has turned the tables and that Eritrea might be sending signals to the US that it is eager to be friends.

Influential groups in Eritrea have been suspected of supporting Somalia’s al-Qaeda-linked al-Shabaab.

Some African diplomats were not surprised by the turnaround. Gulf nations were said to have been heavily involved in negotiations with African countries allied to Asmara in the build up to the visit.

Qatar has been effective in leading talks between Eritrea and some of its hostile neighbours.

The diplomats believe that the talks with Saudi Arabia is an attempt by Asmara to break its international isolation.

This has been enforced through UN resolution 1907, which imposed sanctions on Eritrea over its role in Somalia and refusal to pull its troops out of Djibouti.

With 200,000 soldiers and 12,000 naval personnel, and commanders experienced from Eritrea’s war with Ethiopia, the country could provide the backbone of a coalition invasion force.

The fact that they are ruled by an absolute dictator and dissent in the country has been crushed, then Eritrea would not be faced with a repeat of the Pakistani parliament’s refusal to engage in Saudi’s war in Yemen.

This article is an edited translation from our Arabic edition.