A police officer has been stabbed in the Houses of Parliament in central London, in what police are treating as a terrorist incident. – BBC

A police officer has been stabbed in the Houses of Parliament in central London, in what police are treating as a terrorist incident. Commons Leader David Lidington told MPs the "alleged assailant was shot by armed 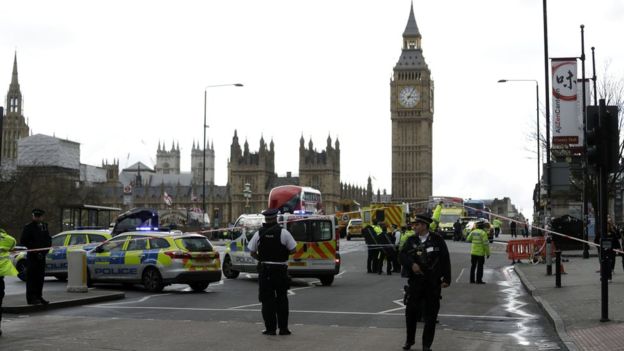 A police officer has been stabbed in the Houses of Parliament in central London, in what police are treating as a terrorist incident.

There are also reports of as many as five people being “mowed down” on nearby Westminster Bridge.

MPs said they had heard three or four gunshots. A Downing Street source said Prime Minister Theresa May was “OK”.

Prime Minister Theresa May was seen being ushered into a silver Jaguar car as what sounded like gunfire rang out at Parliament during the incident.

Staff inside Parliament were told to stay inside their offices.

Tom Peck, political editor for the Independent, tweeted: “There was a loud bang. Screams. Commotion. Then the sound of gunshots. Armed police everywhere.”

“I heard shouts and screams from outside and looked out, and there was a group of maybe 40 or 50 people running round the corner from Bridge Street into Parliament Square.

“They appeared to be running away from something.

“As the group arrived at the Carriage Gates, where policemen are posted at the security entrance, a man suddenly ran out of the crowd and into the yard.

“He seemed to be holding up a long kitchen knife.

“I heard what sounded like shots – I think about three of them – and then the next thing I knew there were two people lying on the ground and others running to help them.

“Armed police were quickly on the scene and I heard them shouting to people to get out of the yard.”

An eye witness, Radoslaw Sikorski, a senior fellow at Harvard’s Centre for European Studies, posted a video to Twitter showing people lying injured in the road on Westminster Bridge.

He wrote: “A car on Westminster Bridge has just mowed down at least 5 people.”

Scotland Yard said it was called to a firearms incident on Westminster Bridge amid reports of several people injured.

Transport for London said Westminster underground station has been shut at the police’s request, and buses diverted.

Mr Lidington said: “It seems that a police officer has been stabbed, that the alleged assailant was shot by armed police.

“An air ambulance is currently attending the scene to remove the casualties.

“There are also reports of further violent incidents in the vicinity of the Palace of Westminster but I hope colleagues on all sides will appreciate that it’d be wrong of me to go into further details until we have confirmation from the police and from the House security authorities about what is going on.”