A JOURNEY ON A TRAIN OF LIFE FOR PEACE, JUSTICE AND HUMAN DIGNITY

Dr. Tesfa G. Gebremedhin, West Virginia University Life is like a journey on a train with its passengers and stations. We are all aboard the train and travel on it until it is time for us 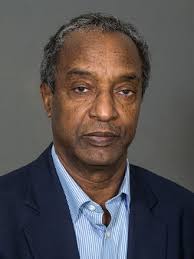 Once upon a time two brothers lived on adjacent plots of farmland they had inherited from their parents. Zeriga (ዘሪጋ} is the younger brother and Taages (ተዓገስ) is the elder brother. For many years, they had farmed together, supported each other with labor, farm machineries, seeds, and other goods. Their children played together and their families shared meals together in good and bad times without a hitch. Being that their plots of land were adjacent, they also both drew water from a creek that divided their two plots. Historically, they contently shared this water supply without any problem, but there came a time when Zeriga increased his use of the creek water such that by the time the water reached Taages’s access to the creek it became more of a stream. Because Taages’s supply of water reduced, animosity developed between the two brothers which eventually led to anger. The conflict initially began with a small and simple problem and it grew into a major conflict that exploded into an exchange of bitter words followed by weeks of silence and separation. Taages had enough of Zeriga’s behavior and as his water supply trickled to almost nonexistent, he hired a carpenter to build him an eight foot high wooden fence around his property. The carpenter was puzzled and asked him to explain the purpose of the fence. Taages told him about his younger brother’s selfish use of the creek water. He explained him that neither of them really owned the water and for many years that they shared the water without any problem, but now things had changed. ­He told the carpenter that he wanted the fence built so he wouldn’t even have to see Zeriga and his family. Taages went to town to bring supplies so that the carpenter would be able to get the necessary materials ready for the job. He then went away on a trip. When he got back from his trip, he was both surprised and angry to see that instead of a fence the carpenter had built a bridge over the stream that divided the two plots of land. He walked over to the bridge and found Zeriga standing on the other side of the bridge. Before he knew how to react, Zeriga ran across the bridge, threw his arms around Taages and embraced him. Wiping tears off his face, Zeriga told Taages that he was surprised when he saw the bridge being built while Taages was away on his trip. Zeriga said, “Instead of harboring discontent and hatred, you built a bridge to demonstrate your love for me.” Confused, but somehow very pleased with the unexpected outcome, Taages had nothing to say or do but to accept Zeriga’s noble gesture of love and appreciation. Taages looked over to see the carpenter packing his tools in the back of his pickup truck. As he wrote a check to pay him for his efforts, he told him how shocked he was to find that his initial orders had been ignored. However, he also expressed his gratefulness. The bridge he built seemed to have healed the wounds resulting from the two brothers’ disagreement about the water. In effect, they found a way for both of them to again benefit from the idea of using the creek. Taages went on to tell the carpenter that he had more work to be done around the farm and he would be pleased if he would do the work for him. The carpenter politely declined the offer and told him that he had other bridges of peace to build elsewhere.

The moral lesson of the story is that there is more than enough love and kindness in this world for every one of us to share and to enjoy life in peace and harmony. The children of the two brothers who were separated from each other by the small and simple conflict of their parents can now come out of their farm houses, cross the bridge of peace and harmony and play together happily as cousins on either side of the bridge. Likewise, similar unfortunate and ridiculous situations have happened and still prevail in our Eritrean communities and religious institutions in which our innocent children are deliberately isolated and separated from their friends and relatives because their stubborn parents fell apart and separated from each other due to differences and disagreements in their political activities and disputes in religious practices. It is imperative among Eritreans in Diasporas that we need to learn to forgive and forget, to accept and respect each other, to throw our guns away, to resolve our political and religious disputes with dignity and integrity, Only then can we bring beautiful flowers of love and friendship to our Eritrean communities and religious institutions that our children and grand-children can inherit from us and cherish the legacy from their parents forever.

As it has been clearly indicated by the social media, UN reports, and by prominent Eritreans who have recently visited Eritrea and by concerned church leaders from inside Eritrea that the country is in an unpleasant situation. The objective reality in Eritrea is characterized by massive exodus of Eritreans of all ages, particularly the most productive young ones, to Ethiopia and other countries, by the influx of Ethiopians to major Eritrean towns and ports to buy and sell goods in an unfair and unregulated market structure and the plan to establish Ethiopian Naval Base and other military forces in our islands, and by the intervention and control of our ports and other parts of our Red Sea coastal zone by Saudi Arabia and United Arab Emirates for military and other undisclosed purposes. Given the current situation in Eritrea we have two choices to make a decision. It is either a choice to get involved in the emancipation and salvation campaign of the country, or it is a defection to join the adversaries in the subjugation and deprivation of human rights of our people. At this crucial time period neutrality or abstainity is considered to be out of order.  Subsequently, before the time comes for us to step down from the train of life at our respective stations to our final destination, we can never find a better time and reason than the present that can bring us together and rally in unity to uphold and raise our voices and deeds for peace, justice and prosperity in our country. It is now the right and best time to walk on the bridge of peace and harmony and join hands in unity and solidarity with the large population of Eritreans who are determined to make a difference in the lives of our Eritrean people. We, need to resolve our small and petty political or religious disagreements and senseless frictions by building bridges of peace and harmony among ourselves. We can be very much concerned about the wellbeing of our children, the welfare of our people, and the sovereignty of our country only when we come together in unity and create peace and harmony among ourselves.  At the present moment the members of the Eritrean political groups, religious institutions and Eritrean communities should be able to talk and listen to each other with decency and great respect instead of building barbed wire fences around themselves and exacerbate and escalate the existing conflicts among themselves. We should be able to build bridges that can help bring about good resolution and reconciliation among the various political functions and the restoration of friendly relations between the two religious groups.  We should not always seek to have our own way, but we need to find a common ground that can embrace all of us in unity and solidarity. We should be able to form a joint coalition that can bring the various groups together to organize and build a united front under the banner and zeal of building our people’s empowerment for peace, justice and human dignity. This endeavor should be followed by forming small groups or teams within the united front to undertake division of labor. For instance, a certain group does the task of diplomatic relation or lobbying for support from governments and international organizations (UN, EU, AU and others), another group is delegated in raising fund for the united front, another group is organized to get involved in recruitment and mobilization of members, etc. It means that we should create a strong institution that can engage us in various activities of the united front. Words of peace or war expressed by concerned Eritreans by talking in various social media or by writing about the Eritrean situation in many websites are not and cannot be as much effective as getting organized in a form of united front and advocate and work for a practical change. If we prevail in an organized form, we can even remove any mountain from its place or captivate any raging wild beast in a cage when we are united and organized. There is more power in unity with diversity than in division and separation because nobody is better or complete without the help of the other. It is evident that “Unity without verity is no better than conspiracy.” History has already told us that where there is unity of our people, there is always victory. We must be united in heart and mind because in union there is always strength and there are no problems we cannot solve together. We must be aware that upon the conduct and behavior of each one of us depend the fate of all of us. The light of unity is powerful; it can illuminate and shine bright on all of us.  Nowadays, we should not be separated by outdated way of thinking and divided by senseless purposes when it comes to the destiny of the people we care and the country we love very much.  We should all stand firm and strong together in unity before the time comes for us to end our journey and step down from the train of life at our respective stations to our final destination which could be either to hell or heaven depending upon the kind of joyful or painful situations we create and leave behind in our Eritrean communities and religious institutions in Diasporas. Thus, we need to learn an important lesson from President John F. Kennedy’s speech when he said, “Ask not what your country can do for you; ask what you can do for your country.” God bless Eritrea and its people!