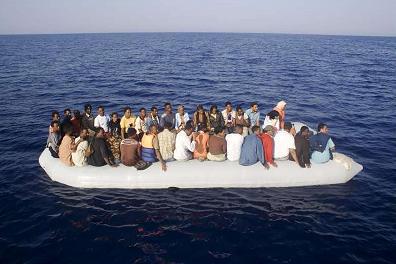 It said on Wednesday in Rome that the figure was the highest monthly number ever recorded in the Central Mediterranean and more than twice as many as in the previous month.

The agency said that the arrivals surged because, after “relatively poor weather conditions in September, people smugglers loaded more people than usual on unseaworthy vessels before winter makes crossings impossible’’.

It said that it led to a very high number of deaths, reporting that 127 bodies were recovered on the sea stretch between Italy and North Africa and that it was likely that many more persons drowned.

“Tragedies were continuing in November as the Italian coastguard recovered one body and 580 migrants were rescued in Wednesday sea operations.

“This added to seven bodies recovered and almost 900 saved Monday and Tuesday,’’ it said.

Frontex said that most migrants who landed in Italy in October came from Nigeria and Eritrea.

The agency noted that Italy became the main entry point for EU-bound migrants in the first half of 2016, after the so-called Balkan route via Greece was closed by an EU-Turkey repatriation deal and tighter border controls.

“Migrants mostly came from Afghanistan, Pakistan and Iraq,’’ it said.

The thousands of Nigerians who seek to enter Europe through Italy via the Mediterranean has been a source of concern to both the Nigerian and European governments.

The Nigerians often travel the rough and risky road route via Niger to arrive in war-torn Libya where they join others to try to cross the Mediterranean.

On Tuesday, the Nigerian anti-trafficking agency, NAPTIP, said it intercepted 50 Nigerians who had embarked on the route.

“There are males and females as well as three minors in the group and they all fall within the ages of three and 45 years,” a NAPTIP official said.