The 2017 World Press Freedom Index compiled by Reporters Without Borders (RSF) reflects a world in which attacks on the media have become commonplace and strongmen are on the rise. We have reached the age 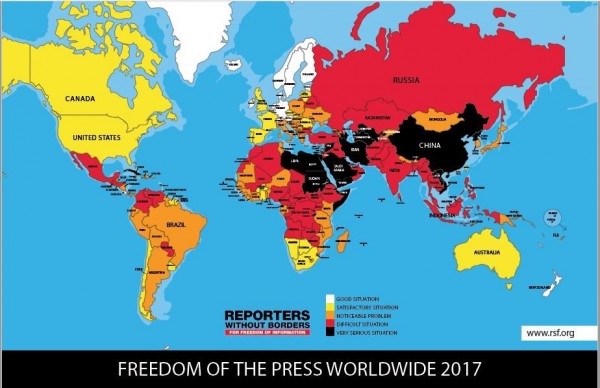 The 2017 World Press Freedom Index compiled by Reporters Without Borders (RSF) reflects a world in which attacks on the media have become commonplace and strongmen are on the rise. We have reached the age of post-truth, propaganda, and suppression of freedoms – especially in democracies.

The 2017 World Press Freedom Index compiled by Reporters Without Borders (RSF) reflects a world in which attacks on the media have become commonplace and strongmen are on the rise. We have reached the age of post-truth, propaganda, and suppression of freedoms – especially in democracies.

I. Democracies falling, advent of strongmen

RSF’s latest World Press Freedom Index highlights the danger of a tipping point in the state of media freedom, especially in leading democratic countries. (Read our analysis entitled Journalism weakened by democracy’s erosion.) Democracies began falling in the Index in preceding years and now, more than ever, nothing seems to be checking that fall.

The obsession with surveillance and violations of the right to the confidentiality of sources have contributed to the continuing decline of many countries previously regarded as virtuous. This includes the United States (down 2 places at 43rd), the United Kingdom (down 2 at 40th), Chile (down 2 at 33rd), and New Zealand (down 8 at 13th).

Donald Trump’s rise to power in the United States and the Brexit campaign in the United Kingdom were marked by high-profile media bashing, a highly toxic anti-media discourse that drove the world into a new era of post-truth, disinformation, and fake news.

Media freedom has retreated wherever the authoritarian strongman model has triumphed. Jaroslaw Kaczynski’s Poland (54th) lost seven places in the 2017 Index. After turning public radio and TV stations into propaganda tools, the Polish government set about trying to financially throttle independent newspapers that were opposed to its reforms.

Viktor Orbán’s Hungary (71st) has fallen four places. John Magufuli’s Tanzania (83rd) has fallen 12. After the failed coup against Recep Tayyip Erdogan, Turkey (down 4 at 155th) swung over into the authoritarian regime camp and now distinguishes itself as the world’s biggest prison for media professionals. Vladimir Putin’s Russia remains firmly entrenched in the bottom fifth of the Index at 148th.

“The rate at which democracies are approaching the tipping point is alarming for all those who understand that, if media freedom is not secure, then none of the other freedoms can be guaranteed,” RSF secretary-general Christophe Deloire said. “Where will this downward spiral take us?”

In the emerging new world of media control, even the top-ranked Nordic countries are slipping down the Index. After six years at the top, Finland (down 2 at 3rd) has surrendered its No. 1 position due to political pressure and conflicts of interests. The top spot has been taken by Norway (up 2 at 1st), which is not a European Union member. This is a blow for the European model. Sweden has risen six places to take 2nd position. Journalists continue to be threatened in Sweden but the authorities sent a positive signal in the past year by convicting several of those responsible. The cooperation between the police and certain media outlets and journalists’ unions was also seen as a step forward in combatting the threats.

At the other end of the Index, Eritrea (179th) has surrendered last place to North Korea for the first time since 2007, after allowing closely-monitored foreign media crews into the country. North Korea (180th) continues to keep its population in ignorance and terror – even listening to a foreign radio broadcast can lead to a spell in a concentration camp. The Index’s bottom five also include Turkmenistan (178th), one of the world’s most repressive and self-isolated dictatorships, which keeps increasing its persecution of journalists, and Syria (177th), riven by a never-ending war and still the deadliest country for journalists, who are targeted by both its ruthless dictator and Jihadi rebels. (See our analysis entitled 2017 Press Freedom Index – ever darker world map.)

Media freedom has never been so threatened and RSF’s “global indicator” has never been so high (3872). This measure of the overall level of media freedom constraints and violations worldwide has risen 14% in the span of five years. In the past year, nearly two thirds (62.2%) of the countries measured* have registered a deterioration in their situation, while the number of countries where the media freedom situation was “good” or “fairly good” fell by 2.3%.

The Middle East and North Africa region, which has ongoing wars in Yemen (down 4 at 166th) as well as Syria, continues to be the world’s most difficult and dangerous region for journalists. Eastern Europe and Central Asia, the second worst region, does not lag far behind. Nearly two third of its countries are ranked below or around the 150th mark in the Index. In addition to Turkey’s downward spiral, 2016 was marked by a clampdown on independent media in Russia, while the despots in such former Soviet republics as Tajikistan (149th), Turkmenistan (178th), and Azerbaijan (162nd) perfected their systems of control and repression.

The Asia-Pacific region is the third worst violator overall but holds many of the worst kinds of records. Two of its countries, China (176th) and Vietnam (175th), are the world’s biggest prisons for journalists and bloggers. It has some of the most dangerous countries for journalists: Pakistan (139th), Philippines (127th) and Bangladesh (146th). It also has the biggest number of “press freedom predators” at the head of the world’s worst dictatorships, including China, North Korea (180th), and Laos (170th), which are news and information black holes.

Africa comes next, where the Internet is now routinely disconnected at election time and during major protests. More than five points separate then the African region from the Americas, where Cuba (down 2 at 173rd) is the only country in the black (i.e. “very bad”) zone of the Index, which is otherwise reserved for the worst dictatorships and authoritarian regimes of Asia and the Middle East.

Finally, the European Union and Balkans region continues to be the one where the media are freest, although its regional indicator (of the overall level of constraints and violations) registered the biggest increase in the past year: +3.8%. The differences in regional indicator change over the past five years are particularly noticeable. The European Union and Balkans indicator rose 17.5% over the past five years. During the same period, the Asia-Pacific indicator increased by only 0.9%.

Nicaragua (down 17 at 92nd) distinguished itself in 2017 by falling further than any other country on the Index. For the independent and opposition media, President Daniel Ortega’s controversial re-election was marked by many cases of censorship, intimidation, harassment, and arbitrary arrest. Tanzania (down 12 at 83rd), where President John “Bulldozer” Magufuli keeps tightening his grip on the media, also suffered a significant fall.

Amid all the decline, rises in two countries seem particularly promising and will hopefully continue. After ridding itself of its autocratic president, Gambia (up 2 at 143rd) has rediscovered uncensored newspapers and is planning to amend legislation that is restrictive for the media. The historic peace accord in Colombia (up 5 at 129th) has ended a 52-year armed conflict that was a source of censorship and violence against the media. No journalists were killed in 2016, making it the first time in seven years that journalists survived their work.

However, other sizeable jumps in the 2017 Index are probably deceptive. Italy (52nd) has risen 25 places after acquitting several journalists including the two Italian journalists who were tried in the VatiLeaks 2 case. But it continues to be one of the European countries where the most journalists are threatened by organized crime.

France has risen six places to 39th position but it was simply recovering from the exceptional fall it suffered in the 2016 Index because of the Charlie Hebdo massacre. It is a country where journalists struggle to defend their independence in an increasingly violent and hostile environment. Excepting the 2016 Index, France’s latest score (22.24) is its worst since 2013, a decline that is due inter alia to problems arising from businessmen using the media as a source of influence. RSF welcomed a new law on media independence but it did not suffice to significantly modify the situation.

In Asia, the Philippines (127th) rose 11 places, partly because of a fall in the number of journalists killed in 2016, but the insults and open threats against the media by President Rodrigo Duterte, another new strongman, do not bode well. Evolution in France’s score
Published annually by RSF since 2002, the World Press Freedom Index measures the level of media freedom in 180 countries, including the level of pluralism, media independence, and respect for the safety and freedom of journalists. The 2017 Index takes account of violations that took place between January 1st and December 31stof 2016.

The global indicator and the regional indicators are calculated based on the scores assigned to each country. The country scores are calculated from the answers to a questionnaire in 20 languages that is completed by experts throughout the world, supported by a qualitative analysis. The scores and indicators measure the level of constraints and violations, so the higher the figure, the worse the situation. Because of growing awareness of the Index, it is an extremely useful and increasingly influential advocacy tool.

* The term “country” is used in its ordinary sense, without any special political meaning or allusion to certain territories.