Working environment The inclusion of Chad, South Sudan and Sudan in the East and Horn of Africa operational subregion as of 2012 will make it one of the largest such areas in which UNHCR operates. There 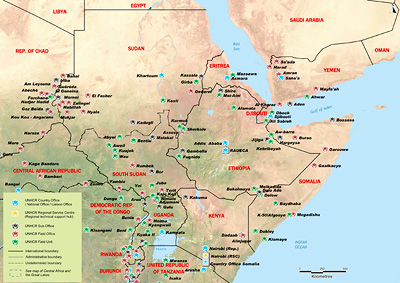 In 2011, the Horn of Africa region was hit by the worst drought in recent history, affecting millions of people. Those living in south and central Somalia have been the worst affected by this crisis, with famine declared in most parts of the region. As a consequence of the deadly combination of drought, insecurity and widespread human rights violations, 300,000 Somalis — mostly women and children — had fled into neighbouring countries, mainly Kenya and Ethiopia, by the end of August 2011.

Governments in the region have continued to provide asylum to those in need, but the massive influx witnessed in 2011 has severely strained reception capabilities. This, and the absence of a foreseeable solution to the Somali crisis, will affect UNHCR’s ability to implement protection and assistance programmes in 2012-2013.

While the separation of the Sudan into two States has not resulted in large-scale conflict and displacement as earlier feared, there are nonetheless a number of localized conflicts that are likely to continue to drive forced population movements in 2012. The situation in Darfur remains fragile, although some returns of refugees have occurred from Chad. On the other hand, the security situation in eastern Chad has improved dramatically since early 2010 as a result of the improvement in political relations between Chad and Sudan.

Strategy in 2012
UNHCR will maintain a strong emergency response capacity throughout the region to ensure that refugees receive adequate protection and assistance. This will enable it to mount an effective response to the ongoing Somalia emergency, which could get even worse. It will also allow UNHCR to deal effectively with the consequences of the Sudan situation, should 2011 witness additional displacement. For that purpose, contingency plans, developed in close cooperation with partners, will be updated on a regular basis and emergency stockpiles maintained in the region.

During the first eight months of 2011, countries in the region had received more than 300,000 refugees from Somalia, most of them accommodated in already overcrowded camps. In 2012, assistance programmes will focus on ensuring adequate assistance in the following key sectors: water and sanitation, shelter, health, primary education and the provision of core relief items.

Supply management systems will be upgraded and strengthened to support protection and assistance activities. In Sudan, UNHCR will assume the management of the Common Humanitarian Pipeline (CHP). Staffing will also be increased significantly in Kenya and Ethiopia to ensure the proper management of programmes and monitoring of protection needs. The massive influx witnessed in 2011 also requires that greater attention be given to protection-related activities, such as the proper reception and registration of refugees, as well as the setting up of effective monitoring systems.

Addressing human trafficking and smuggling, of which Eritrean, Somali and Ethiopian asylum-seekers are the main victims, will be part of UNHCR’s priorities in 2012. The search for firewood and the competition for other scarce resources increasingly engender conflict with host populations. To address this concern, UNHCR will ensure that refugees are able to obtain and afford domestic-energy supplies, while also providing more solar cookers and improved stoves to reduce the consumption of firewood. UNHCR will strengthen reforestation programmes, providing tools and seeds to refugees.
Alongside countries directly affected by the situation in Somalia, Uganda may see an increase in the ongoing refugee influxes from the Democratic Republic of the Congo (DRC) should there be political disturbances resulting from the electoral process slated in the DRC for later in 2011.

Enhancing livelihoods and self-reliance, especially in protracted refugee situations, will continue to be one of UNHCR’s main objectives in the region. In eastern Sudan, UNHCR expects to convert at least four more refugee camps into sustainable village communities through the Transitional Solutions Initiative, which is being implemented together with UNDP and the World Bank.

UNHCR will also focus on ensuring that Central African refugees in Chad benefit from improved self-reliance and livelihood programmes in 2012-2013. Together with national and international partners, UNHCR aims to help these refugees to become more self-reliant, targeting livelihood activities and microfinance schemes towards the most vulnerable.

In Ethiopia, the Government has introduced an “out-of-camp” policy for self-sufficient Eritrean refugees who are able to live outside camps without assistance. This policy could likewise be applied to benefit other refugee populations, including Somalis. In Kenya, as part of efforts aimed at addressing the needs of host populations, UNHCR has started discussing longer-term development projects which would not anchor the refugee population in the Dadaab area, but could create opportunities which would allow them to become less dependent on assistance.

Regarding solutions, the plan to declare the cessation clauses for Rwandan refugees will result in the repatriation or local integration of some, while others will integrate locally. Resettlement will continue to be used strategically in the region and in support of other solutions benefiting larger groups of refugees, such as Somalis and Eritreans. There are very limited prospects for repatriation in the region. Depending on the evolution of the situation in Darfur, some returns of refugees and IDPs may occur.

UNHCR will continue to play its role as part of the cluster approach in Chad and to monitor the situation of returnees under its role in the Joint Verification Mechanism. In Uganda, with more than 95 per cent of the 1.8 million people who had been internally displaced in the north of the country having left for their places of origin, UNHCR is phasing out its IDP programme at the end of 2011 and handing over its protection responsibilities to the Uganda Human Rights Commission.

In Somalia, UNHCR focuses on its global cluster responsibilities by providing leadership in the shelter/non-food items and protection clusters. UNHCR will be advocating for more to be done to foster a protection environment in Somalia that would provide Somalis with meaningful alternatives to forced displacement across borders. In its interaction with partners, UNHCR is promoting the need to create conditions for Somalis that would ensure their right to receive protection and assistance wherever they are, whether in their home areas, along displacement routes, in situations of displacement, or as refugees. UNHCR will engage in cross-border operations to provide assistance, along with other agencies, in parts of the country where some level of security has been achieved.
Constraints

The main constraints faced by the Office in the East and Horn of Africa region revolve around the uncertainty of the situation in a number of the countries covered in this regional overview. The sheer size of the Somali refugee outflow has also tested response capacity.

The lack of access to people in need of protection and assistance will represent a constraint in environments such as south and central Somalia, as well as Sudan, including in the Three Protocol Areas. Security threats to refugee camps in regions bordering Somalia will need to be taken into account in devising responses.

Furthermore, UNHCR is concerned about a reduction of asylum space for Somali refugees in neighbouring countries, as well as further afield. Along the route to South Africa, Somalis have been returned at borders or not been admitted to the asylum procedure.
Operations

People of concern to UNHCR in Eritrea are mainly Somali, Sudanese and Ethiopian asylum-seekers and refugees. The Government of Eritrea recognizes Somali and Sudanese refugees on a prima facie basis, while Ethiopians are recognized by UNHCR Eritrea under its mandate. The Somali and Sudanese refugees are camp-based and reside in Emkulu and Elit camps, respectively. Most Ethiopian refugees reside in the capital, Asmara.

It is not foreseen that return will be possible for the Somali or the Ethiopian refugees. In the case of the Sudanese, however, a return could be envisaged. Since local integration is not an option, resettlement remains the main durable solution. To date, a total of 165 Somali, Ethiopian and Sudanese refugees have been resettled in third countries. The main operational objectives and priorities of UNHCR Eritrea in 2012 and 2013 will continue to focus on providing international protection and seeking durable solutions for Somali, Sudanese and Ethiopian asylum-seekers and refugees, as well as providing care and maintenance to camp-based Somali and Sudanese refugees and urban-based Ethiopian refugees.

The Regional Support Hub (RSH) in Nairobi provides operational support and advice to 12 countries in East Africa, the Horn of Africa and the Great Lakes region, with the principal goal of pursuing the Global Strategic Priorities as they relate to the 21 specialist units of the Hub. In conjunction with this, the RSH aims to support the efforts of UNHCR’s Africa Bureau to ensure strategic coherence, programme quality and results, management effectiveness, accountability and financial due diligence, among all operations in the region.

The objectives pursued by the Hub are the improvement of protection and assistance across the region, the sustainability of initiatives, self-reliance, gender equality, comprehensive approaches to protection and durable solutions and continuous contingency planning and emergency preparedness for areas with a volatile political and security environment.
Financial information