by Ruth Samuel While I was updating myself on current Eritrean political issue, a bold burgundy font stating 'September 18, 2001 has dark history in our country' grasped my attention. The title reminded me of the 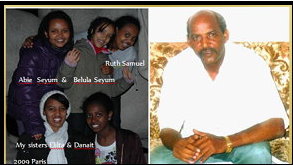 While I was updating myself on current Eritrean political issue, a bold burgundy font stating ‘September 18, 2001 has dark history in our country’ grasped my attention. The title reminded me of the historical event, which was the turning point in Eritrea’s political spectrum. Even though I was a child then, I was conscious of the distress and agony that was taking place amongst family members, thus including our home. Our joyful house turned into hidden sorrow. My mother’s sudden peculiar character was overwhelming me with a grief that I didn’t know was there.

There were a lot of concealed conversations accompanied by undertone whispers. I sensed fear, although it was never visible to the eye but sharply felt in the heart. I began to recollect, bringing awareness to myself and learned the detention of a close friend to my father Seyum Tsehaye, who I remember very well as he used to come home frequently. Since then, every September of every year, we remember the day and the suffering that was inflicted on their families. We also remember the brief period that preceded it, that is when some semblance of freedom of expression seemed to be part of the post independence political life in Eritrea and the hopes for a smooth transition towards democracy that were quickly relegated. We are also reminded of how things have changed in our country since then.

12 years ago last year on this day, September 2001, the Eritrean government arrested 11 top high ranking officials, many other descendants and journalists including Seyum Tsehaye as they call up for a democratic reform on the government policies and respect of basic human rights.

Those who were arrested and didn’t get a day at court, God knows how many of them are still alive, are heroes and will so remain. Many of them didn’t actually have illusions about what their fate would be but wanted to break the cycle of fear and empower the people of Eritrea so that its citizens can finally start taking charge of their destiny and that of their country. It was the day the tyranny that was hidden for so long was finally exposed.

One of the detainees who were arrested after he expressed his political view and opinion on the privet press Setit is Seyoum Tsehaye. He was a great friend and colleague of my father. I knew Seyoum since I was a child and after his arrest my mother and his wife Saba became good friends. Of course at the time I was not mature enough to comprehend their arrests nor was I aware of any possible political dissent but I noticed his absence. His daughters Abie and Belula used to spend a lot of time with my sister and I. After his arrest, his eldest daughter Abie that was five at the time became very curious and inquisitive about her fathers whereabouts. Those naïve childish excuses did not suffice at the tender age of five.

Not long after, the political instability in Eritrea forced my family to illegally migrate and settle in the UK. Similarly Saba and her children Abie and Belula settled in France shortly after. In 2009 we reunited with them in France, Paris as we went to visit them. My father along with my sisters and I spent a week there with them. When I met Abie, she was very mature for her age considering she was just eleven back then. I remember her asking me ‘If you could have one wish, what would it be?’ and I impassively replied ‘ To have a voice like Beyoncé’. In hindsight, I find my spontaneous but nevertheless innocent and childlike response embarrassing. When I asked her the same question; she replied ‘ To hug my dad and eat breakfast with him and Belula and Saba even if the moment lasts for a second’.

Those words may sound simple but they are so powerful and carry immense weight to my heart. Both Abie and Belula never missed a prayer before going to sleep, waking up and in between meals to pray for their fathers release and to bring him home safe. I extol them for persevering and withstanding the agony with dignity. No child deserves to be deprived of a father or mother for political or other reasons. The loss is even more painful when there are no grounds for it. I’ve never met young girls like Ab              and Belula who are consistently fighting to generate justice.

This is a young girl, Abie who never saw her father since the age of two as one morning;

The soldiers came and they picked him up and stuffed him in the belly of a waiting jeep then off to an endless absence leaving a haunting empty space which no one else but him. He felt no query, no warning, and no probe just one neat sack for a stainless record.

As an act of hopelessness and desperation sometimes Abie would listen outside her mother’s door and hear her cry for him. She prays for her even more than herself, praying for a miracle to happen. Nothing else could comfort her but her fathers smile and his warmth tight embraces. This is the painful life Abie and her family is leading. It has been more than a decade since Abie and her families have not heard of their loving and caring father. Can you imagine what their days and nights are like not knowing the whereabouts and the state their father is in?

Sadly, Abie and Belula are not the only ones who have been suffering such a deprivation in our country, Eritrea. But before anything else, please take time to appreciate Abie and Belula for campaigning justice to be served for their father and all political prisoners  who’s justice  has been denied.

I listened and read Abie’s speech that she delivered at the assembly and the side event. It was very, powerful, moving and heartbreaking. I want every justice loving person to encourage her to continue her fight for her father, fight for human rights, fight for democracy and there would come a time when she no longer have to fight for those things as they would be no longer wants and needs but necessities.

These children deserve our sympathy and support because the injustice they are suffering should concern us all. We can never feel and experience their pain because we are not deprived of the love and care of our fathers, but the least we could do is empathies with them and be part of their fight for freedom and justice.

September 18, is not just about the G15 reformists who were arbitrarily arrested and detained incommunicado to this date or the journalists who were rounded a couple of days later or the nascent independent press that was completely shut down or those who before all this, were arrested and unaccounted for to this date, or even their families who were made to suffer and continue to suffer for no reason.  It is mainly about us Eritreans, about our collective conscience that is constantly being tested, and our frightening silence that is allowing the status quo to continue unchallenged.  The great Martin Luther Kind once said: ‘Our lives begin to end the day we become silent about things that matter’. It only makes you reflect how relevant this is to what’s happening in Eritrea today.

This day is significant in many ways. It is certainly not the first time when people with views critical to the government in Eritrea were arrested.  Furthermore it is mainly the day when the entire post independence political process was officially arrested and any hope for the establishment of the rule of law was shelved. To the contrary, the ruling party has been arbitrarily arresting, detaining and torturing political dissidents since early nineties. While all previous violations were carried out in secret, the G15 were arrested in broad light and was meant to be the first step of a series of actions aimed at arresting the nascent reform movement that was gaining momentum among the wider population across Eritrea. While all other victims were either ordinary citizens, low profile members of the ruling party or leaders of other political organisations, or simply ordinary citizens suspected of political affiliation to parties other than the one in power, the G15 were high ranking governments officials, party leaders and army generals who all belong to the ruling party. They happened at a time when there appeared to be high hopes for the establishment of the rule of law and the democratisation of the country. The G15 were the leaders of the reform movement within the ruling party who put their lives at risk to save a country they fought to liberate.

We remember this day for its symbolism and because it was the turning point in many ways. It was the beginning of a dark period in post-independence Eritrea. This downward spiral that started on September 18, 2001 continues to this very date. Conditions in Eritrea are deteriorating at an even greater speed endangering the very existence of this young nation born out of so much sacrifice. The mass exodus of the post independence generation of Eritrea is a clear testimony of this reality.

This journey, a journey towards nowhere, will only come to an end when the silence that brought it comes to an end. Let us answer the call. Let us be on the right side of history, for our people, our nations, and future generations, whose lives will be shaped by the work we do today. I write this with great hope and confidence that no matter how long the road ahead, we will travel it successfully together. However, this will only happen if we take action and not through making good wishes.

Also I want every freedom and justice loving person to support the noble cause Abie, her sister Belula and their mother, Saba, are fighting for. They deserve justice and our unconditional support and empathy.

Abie, remember, change will come, sooner or later, but one thing is certain. Our people will be free from arbitrary and incommunicado detentions without trial. Keep your head up and continue campaigning. I and many like-minded young men and women will always support you. God bless you, and I hope to see you soon.

For reminder of our collective silence Let us remember all our political prisoners but let us also remember that the best tribute we can make is to make Eritrea what they had wanted it to be.