Repressive governments use sophisticated digital censorship and surveillance alongside more traditional methods to silence independent media. A special report by the Committee to Protect Journalists. Eritrea is the world's most censored country, according to a list compiled 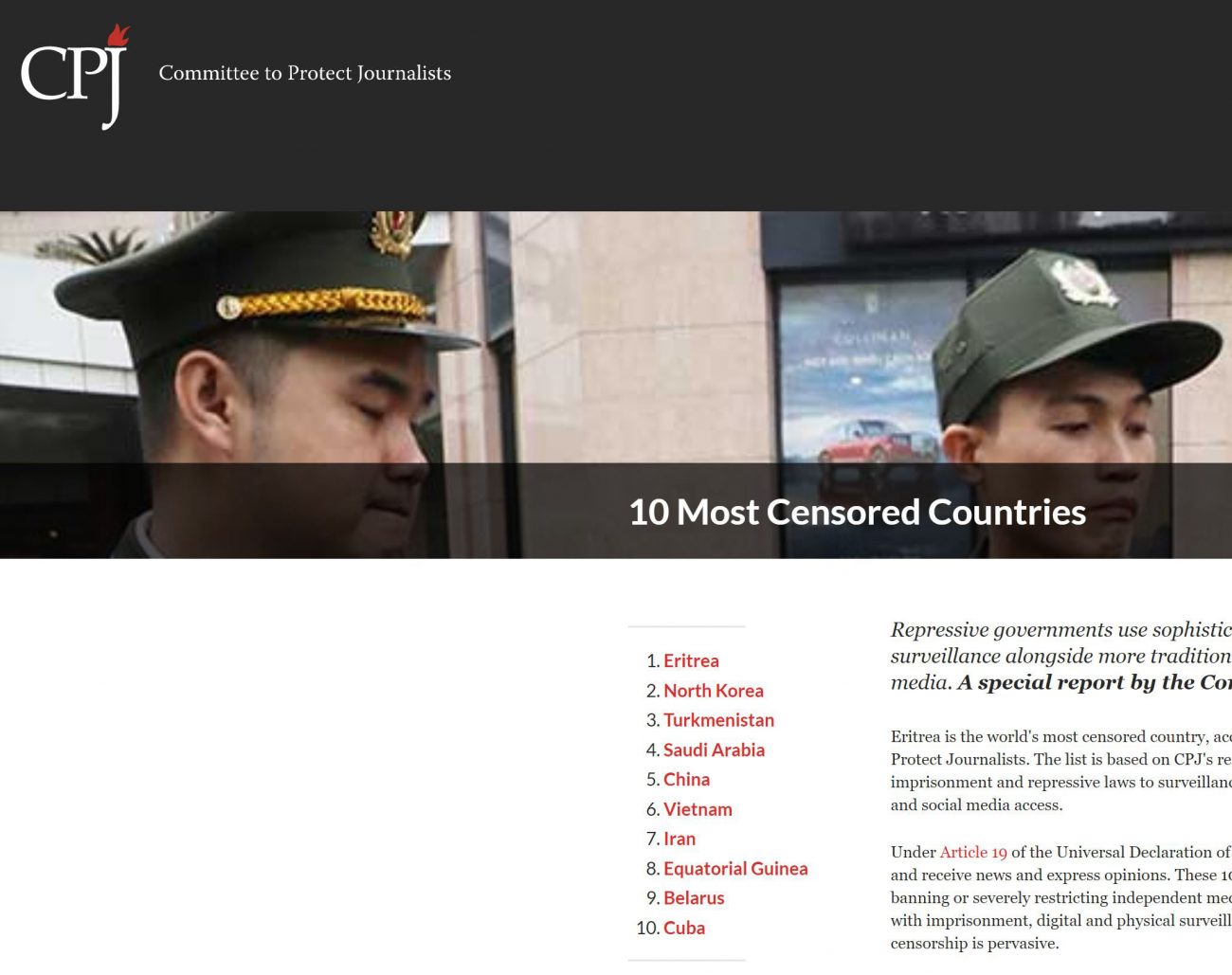 Repressive governments use sophisticated digital censorship and surveillance alongside more traditional methods to silence independent media. A special report by the Committee to Protect Journalists.

Eritrea is the world’s most censored country, according to a list compiled by the Committee to Protect Journalists. The list is based on CPJ’s research into the use of tactics ranging from imprisonment and repressive laws to surveillance of journalists and restrictions on internet and social media access.

Under Article 19 of the Universal Declaration of Human Rights, everyone has the right to seek and receive news and express opinions. These 10 countries flout the international standard by banning or severely restricting independent media and intimidating journalists into silence with imprisonment, digital and physical surveillance, and other forms of harassment. Self-censorship is pervasive.

In the top three countries–Eritrea, North Korea, and Turkmenistan–the media serves as a mouthpiece of the state, and any independent journalism is conducted from exile. The few foreign journalists permitted to enter are closely monitored.

Other countries on the list use a combination of blunt tactics like harassment and arbitrary detention as well as sophisticated surveillance and targeted hacking to silence the independent press. Saudi Arabia, China, Vietnam, and Iran are especially adept at practicing these two brands of censorship: jailing and harassing journalists and their families, while also engaging in digital monitoring and censorship of the internet and social media.

The list addresses only those countries where the government tightly controls the media. The conditions for journalists and press freedom in states such as Syria, Yemen, and Somalia are also extremely difficult, but not necessarily attributable solely to government censorship. Rather, factors like violent conflict, insufficient infrastructure, and the role of non-state actors create conditions that are dangerous for the press.

How censorship works: The government shut down all independent media in 2001. Eritrea is the worst jailer of journalists in sub-Saharan Africa, with at least 16 journalists behind bars as of December 1, 2018; most have been imprisoned since the 2001 crackdown, and none received a trial. According to freedom of expression group Article 19, the 1996 press law includes a requirement that the media must promote “national objectives.” The state retains a legal monopoly of broadcast media, and journalists for the state media toe the government’s editorial line for fear of retaliation. Alternative sources of information such as the internet or satellite broadcasts of radio stations in exile are restricted through occasional signal jams and by the poor quality of the government-controlled internet, according to DW Akademie. Internet penetration is extremely low, at just over 1% of the population, according to the U.N. International Telecommunication Union. Users are forced to visit internet cafes, where they are easily monitored. A March 2019 report by the Collaboration on International ICT Policy for East and Southern Africa suggests that the authoritarian state is so “brutal or commanding” as to “render ordering overt internet disruptions unnecessary.” However, on May 15, 2019, the BBC reported a social media shutdown in Eritrea, ahead of the country’s Independence Day celebrations. With the opening of the border with Ethiopia in mid-2018, some foreign journalists received special accreditation to visit Eritrea, according to The Economist, but access was tightly controlled.

Lowlight: As many as seven journalists may have perished in custody, according to reports that CPJ has not been able to confirm due to the climate of fear and tight state control. The government has refused all requests to provide concrete information on the fate of imprisoned journalists. In June 2019, more than 100 leading African journalists, scholars, and rights activists wrote an open letter to Afewerki, asking to visit long-imprisoned journalists and activists; this request was soundly rejected, and deemed “inappropriate” by Eritrea’s Ministry of Information.